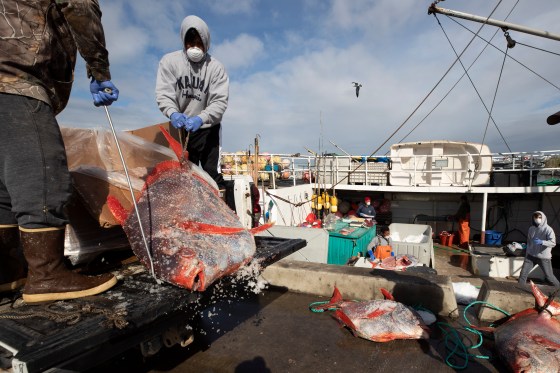 The coronavirus literally traveled over them from Asia to California while they were on the high seas catching tuna.

And now, fishermen are returning home to California to find a state all but shuttered and nowhere to sell their catch. A handful of tuna boats filled with tens of thousands of pounds of fish are now floating off San Diego’s coast as they scramble to find customers. Many wholesalers stopped buying as restaurants were ordered closed except for takeout.

San Diego, once known as the tuna capital of the world, boasts a thriving industry that sells primarily to wholesale buyers and restaurants.

Many are third-generation fishermen, like Nick Haworth. He pulled up his vessel to a dock in downtown San Diego with 30,000 pounds (13,600 kilograms) of big eye tuna and opah. It was selling for $10 a pound to the public, a third of the market price.

Another two vessels planned to sell at the dock Saturday.

“This is a quarantine special,” a tanned Haworth donning a mask and blue surgical gloves joked as he took orders from people standing 6 feet (1.8 meters) apart on the dock while seals barked around his boat, the Kaylee H.

Gregory Bull—APOpah fish are hauled onto a dock for sale on March 20, 2020, in San Diego.

When Haworth left a month ago to fish about 600 miles (970 kilometers) from the coast, the coronavirus was still concentrated primarily in China. The general feeling, he said, was that it was coming under control. President Donald Trump was telling the nation the numbers were only going to get better.

Read more: The Trump Administration Fumbled Its Initial Response to Coronavirus. Is There Enough Time to Fix It?

As his crew motored farther out to sea, a pandemic was declared, though Haworth didn’t know it because his radio was broken.

It wasn’t until they were returning weeks later and were within 50 miles (80 kilometers), or about five hours away, that they picked up a signal for their TV to work and learned from the news of the worldwide closures, including in California and the Philippines, where many of his crew members have family.

California on Friday confined its 40 million residents to home in the strictest response yet.

“The second we saw the news, I knew we were screwed,” Haworth said as he drove a boat filled with thousands of pounds of …read more

‘A really bad time for this to happen’: Stores, malls may not survive COVID-19 pandemic, school of retail director says