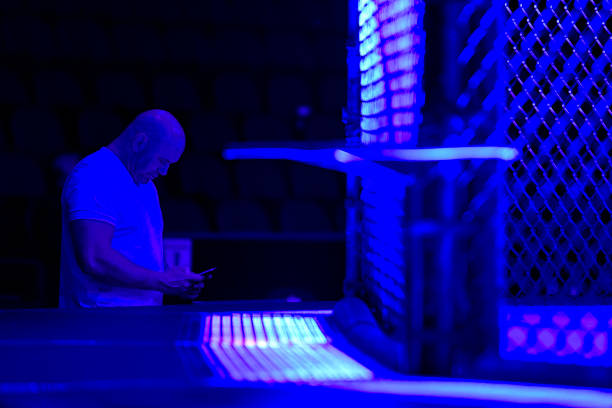 As usual, there were a number of memorable images from the latest UFC card. On Wednesday from Jacksonville, Florida, Glover Teixeira pulled the upset with a fifth-round TKO win over Anthony Smith.

The fight should have been stopped sooner, but the referee Jason Herzog nor Smith’s cornermen saw fit to pull the plug. Unfortunately, their failure to protect the fighter left this unforgettable image of Smith handing Herzog his tooth.

You can see all of the KOs and submissions from Wednesday’s card here. Let’s look at the other memorable images from UFC Fight Night 171.

UFC President Dana White is caught under a hypnotic blue light prior to the start of UFC Fight Night 171. White has pushed to keep his promotion active through COVID-19, despite tons of critics.

Love him or hate him, this image is eye-catching because of the lighting and White’s undeniable presence.

GettyJACKSONVILLE, FLORIDA – MAY 13: A security manager takes the temperature of a member of the media prior to UFC Fight Night at VyStar Veterans Memorial Arena on May 13, 2020 in Jacksonville, Florida. (Photo by Douglas P. DeFelice/Getty Images)

Part of the protocol for having the events in Florida is testing for COVID-19 and temperature checks for everyone who enters the arena.

While we know these things are taking place, it’s still somewhat startling to see these images at an event that didn’t require such precautions just a few months ago.

This cut is HORRIBLE pic.twitter.com/z0qlXfebqL

In the Octagon, there was no shortage of blood. This leg injury suffered by Gabriel Benitez is one of the nastiest I’ve ever seen. He got it in his fight with Omar Morales, a fight the former lost by decision.

Morales checked one of Benitez’s leg kicks in the first round and it caused this injury. It’s one of those things that make your skin crawl, but for some reason, you feel compelled to look at it at least once.

Your letters for May 29