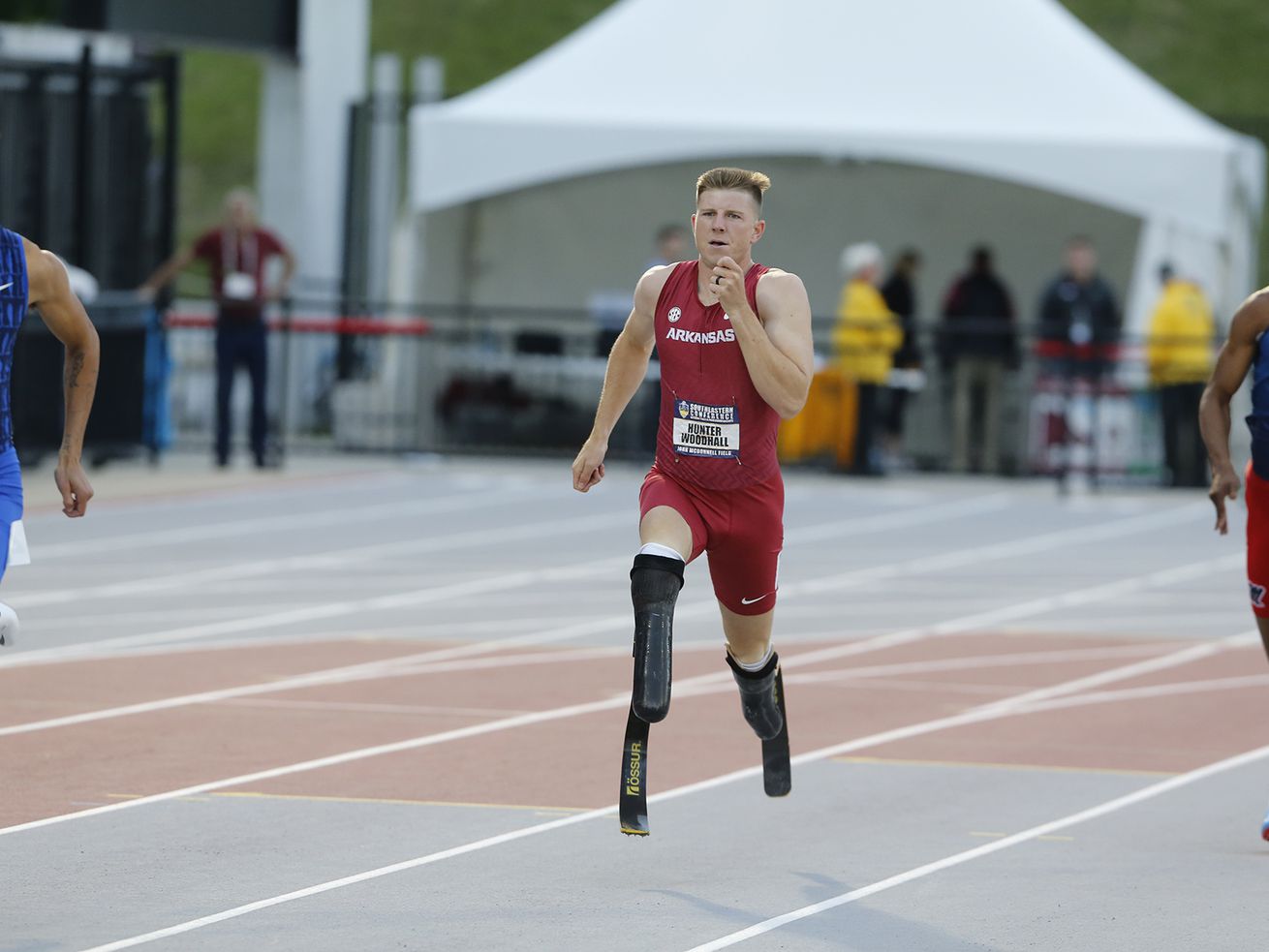 Hunter Woodhall competes in the 400m prelims of the 2019 SEC Outdoor Championships, hosted by Arkansas. Woodhall placed fourth in the final with a career best time of 46.22. | Robert I Black

SALT LAKE CITY — Each Sunday night for the past eight weeks, actor John Krasinski, best known for his role as Jim Halpert on the TV show “The Office,” has posted on YouTube an installment of a video series he’s titled “Some Good News.” Filmed at Krasinski’s home with him as “anchor,” the show highlights positive things that are happening around the world during the coronavirus pandemic.

In the opening minute of the May 10 episode, which has been viewed over 9 million times, a video clip shows a young man laying on his bed, texting some friends to see if they want to go on a run. Then two younger boys appear on the screen, reading the text from their respective homes.

The next scene is three videos mashed into one, showing all three of them running in their own neighborhoods. As the beginning of that scene develops, it becomes evident that none of the three have legs, and thus use prosthetic blades to run.

In the full video not shown on “Some Good News,” the trio races around their various neighborhoods, offering support to each other but also talking a little friendly trash about beating each other in a race.

The man who opened the video with the text message is Utahn Hunter Woodhall, the Syracuse High grad who set a couple of state high school records on the track, won a silver and bronze medal at the 2016 Summer Paralympics and became the first double amputee to ever be awarded a Division I track scholarship.

Prior to ending up on Krasinski’s show, Woodhall had tweeted the video of him, Jack Cunningham and Chase Merriweather at Krasinski. It was produced by Challenged Athletes Foundation, which aims to provide support to people with physical challenges so they can pursue active lifestyles through sport.

What do you think about another race with @johnkrasinski I guess that’s a challenge https://t.co/bGoi7tFVXr

CAF is special to Woodhall, as it helped him get involved in running when he was younger, and now he serves as a mentor of sorts for Cunningham and Merriweather through it. His hope was that …read more

Looking back: For former BYU runner and Olympian Frank Fredericks, the burden of expectation was always with him