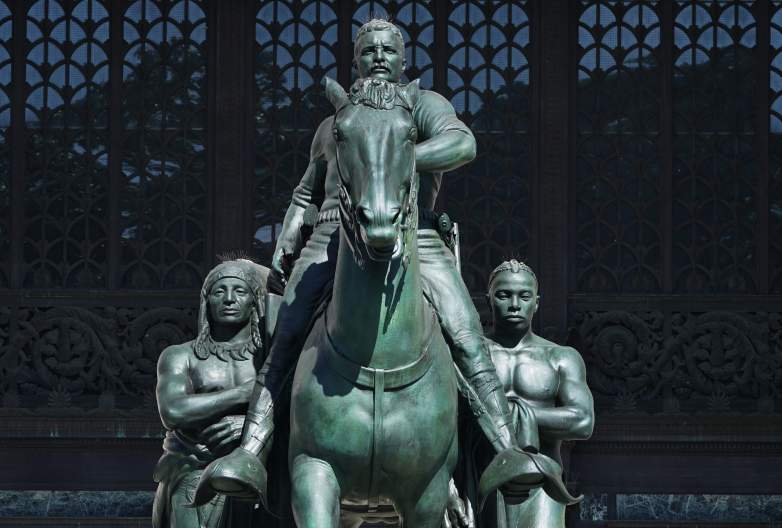 The American Museum of Natural History announced Sunday that the iconic Equestrian Statue of Teddy Roosevelt, which has stood in front of the museum for 80 years, would be removed. The statue is considered racist by many because of how it depicts Native American and African figures.

And as debate rages nationwide over statues commemorating heroes of the Confederacy and whether the hurt they cause outweighs their historical value, the Museum of Natural History will likely send Roosevelt’s statue the way of Robert E. Lee and other controversial historical figures that have recently had their monuments removed.

Reactions to the announcement Monday ranged from gratitude to outrage, and the museum did not immediately establish a timeline for the statue’s removal.

Getty/Timothy A. ClaryThe Theodore Roosevelt Equestrian Statue, pictured on June 22. The statue is to be removed, the museum announced that day.

Former President Roosevelt, also a notable conservationist, is depicted astride a horse, flanked by a Native American and African figure, both of whom appear subservient to Roosevelt, the white man. The statue was dedicated in 1940. James Earle Fraser, the sculptor, said that the two men could symbolize Roosevelt’s “friendliness to all races,” according to the museum’s website.

The explanation of the architect, John Russell Pope, was significantly more patronizing and offensive to contemporary attitudes. He described the two figures flanking Roosevelt as “the American Indian and the primitive African,” and said the statue would memorialize “the fearless leadership, the explorer, benefactor and educator” — Roosevelt.

Roosevelt is generally recognized as one of the country’s five great presidents. The National Park System expanded greatly under him and many of his economic policies lay the groundwork for the New Deal in 1931, according to historian John Hardman. University of Cambridge American History Professor Gary Gerstle even told WBUR that Roosevelt’s economic populism would today put him “squarely in Bernie Sanders’s camp.”

However, Roosevelt also held racist beliefs and regarded Native Americans as savages, according to Gerstle. “He would have had no patience with the indigenous and original inhabitants of a sacred American space interfering with his conception of the American sublime,” he said. Roosevelt’s beliefs were very much …read more