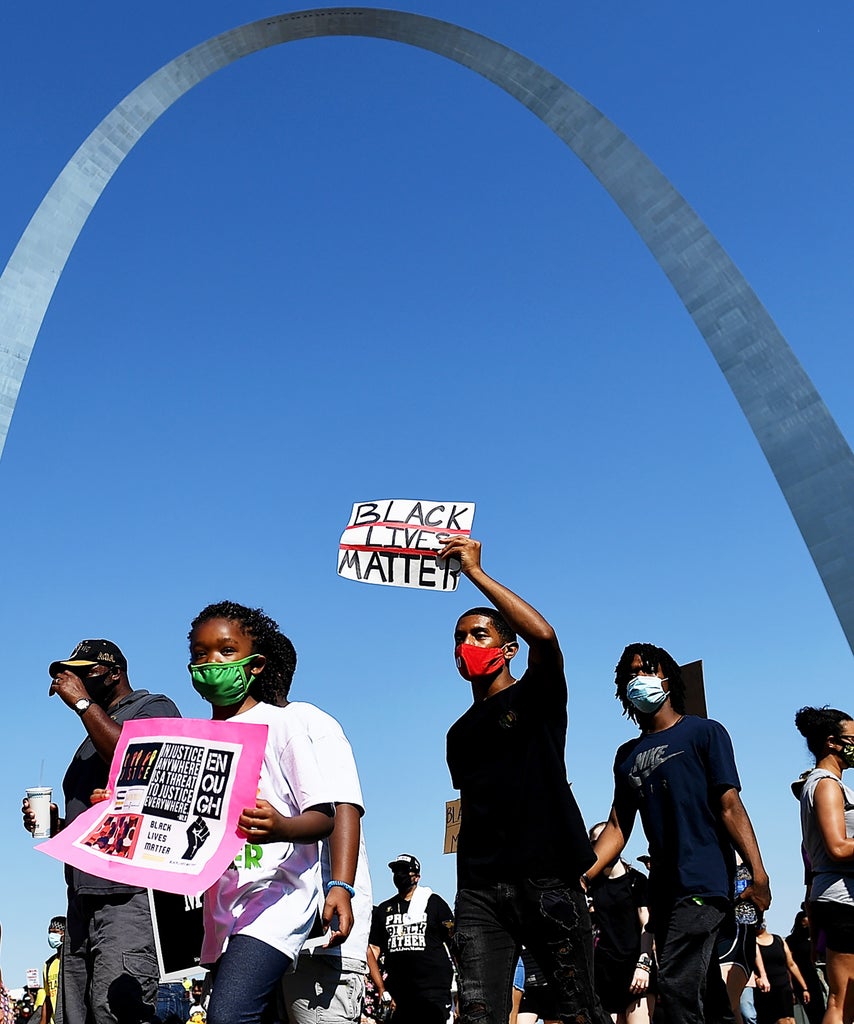 In true 2020 form, there is a harrowing answer to Bonnie and Clyde and it’s “Ken and Karen,” a white St. Louis, Missouri, couple who pointed loaded guns at a group of Black Lives Matter protesters marching past their lavish property on Sunday.

In pictures and videos posted to social media, the couple — whose real names are Mark and Patricia McCloskey — can be seen barefoot on their front lawn, aiming an AR-15 rifle and a handgun at protesters as they pass by their expansive home. It should be noted, apropros of perhaps nothing, that Ken is wearing a pink polo shirt and khaki pants while pointing said gun.

Amid ongoing nationwide protests to demand that police be held accountable for the violence they disproportionately exert against people of color, demonstrators in St. Louis had been moving peacefully through the city’s wealthy Forest Park neighborhood on Sunday evening to demand the resignation of Mayor Lyda Krewson. Protestors specifically called out Krewson for her decision to release the names and addresses of residents who had participated in anti-police brutality actions. But when protesters breached the gates of the McCloskey’s gated community, the couple seemingly decided to go full vigilante to defend their property, known locally as the Neimann Mansion.

In pictures and videos shared to Twitter, the McCloskeys can be seen indiscriminately brandishing their weapons at the crowd, although it’s unclear whether or not the guns were actually loaded at the time of the altercation. At one point, Mark McCloskey appears to accidentally point his AR-15 rifle at his wife as he locks eyes with protesters.

Social media users were quick to bestow the “Karen” and “Ken” monikers usually reserved for entitled white people upon the couple, lumping them in with the similarly armed white protesters who have descended upon statehouses and capitals in recent weeks to protest the injustice of being forced to wear masks in public. And, in the hours since the images of them circulated, mock-ups of Karen and Ken Chadbro as a movie poster (with special guest “Freedom Musket”) have started to quickly go viral.

To make matters worse (for himself), Trump re-tweeted a video of the McCloskeys holding weapons at protestors, just one day after the president tweeted another video in support of “white power.” Advocates of the Black Lives Matter movement have called Trump’s actions to be racist and calculated, …read more

Kim Kardashian to Kylie Jenner: Yo, I’m a Billionaire, Too!

Armando Rubio: My Ex-Wife Died While Trying to Ram Me Off the Road