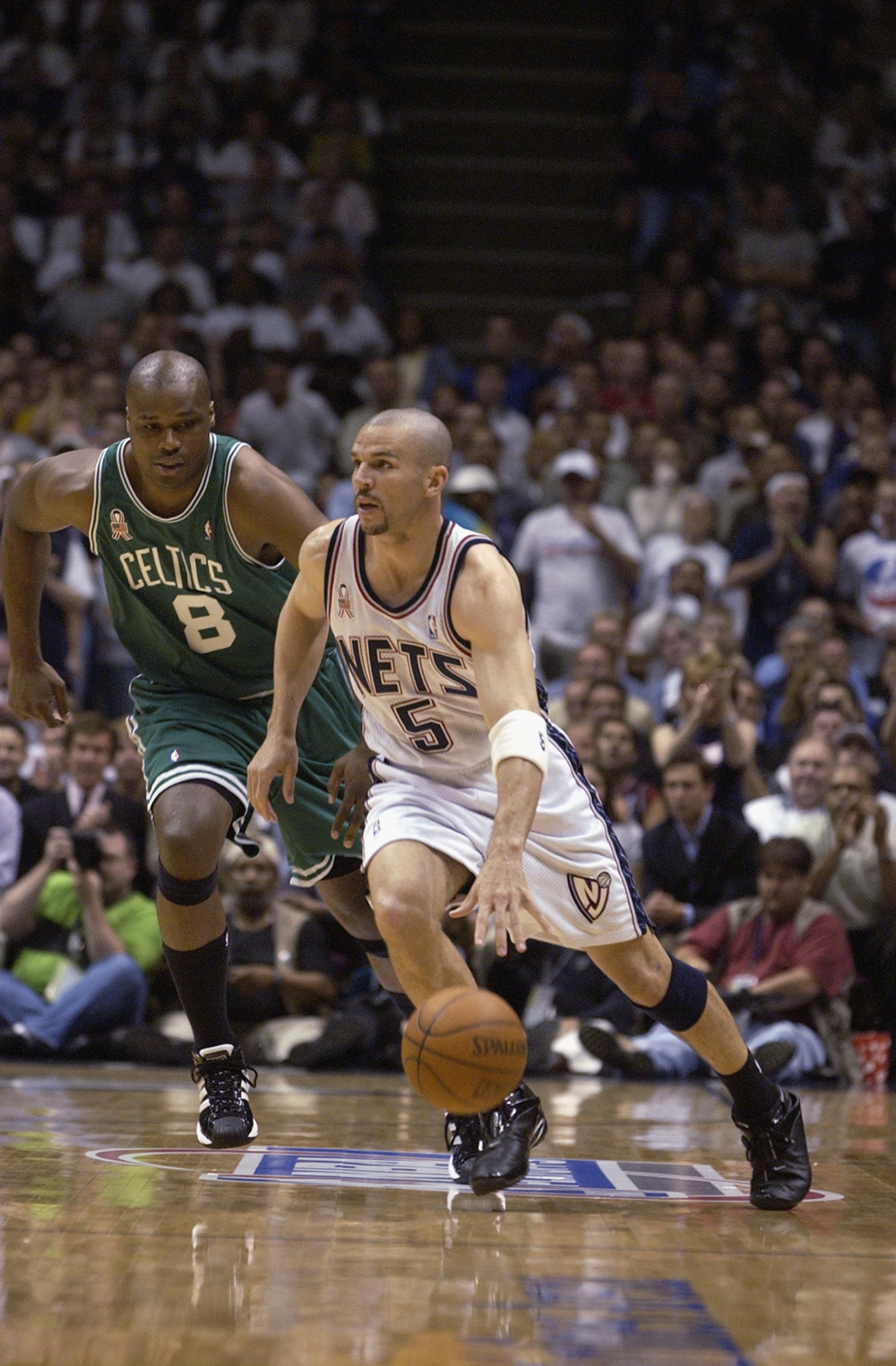 As a player, Jason Kidd guided the New Jersey Nets to two NBA Finals appearances against the Los Angeles Lakers in 2002 and the San Antonio Spurs in 2003.

They lost both, but Kidd arrived to New Jersey highly respected for turning around a franchise with no real identity.

Antoine Walker knows a thing or two about that.

The duo of Walker and Paul Pierce and blossomed during the 2001-02 season when the Jim O’Brien led-team boasted a 49-33 record and made their first NBA Playoffs appearance in seven years. Walker’s stat sheet was amazing 22.0 points and 5 assists per contest.

The Celtics made it all the way to the NBA’s Eastern Conference Finals, but would eventually lose in six games to a talented Nets team that was guided by Byron Scott and featured Jason Kidd, Kenyon Martin, Keith Van Horn and Richard Jefferson.

EAST RUTHERFORD, NJ – MAY 29: Point guard Jason Kidd #5 of the New Jersey Nets drives past forward Antoine Walker #8 of the Boston Celtics in Game five of the Eastern Conference Finals during the 2002 NBA Playoffs at Continental Airlines Arena in East Rutherford, New Jersey on May 29, 2002. The Nets won 103-92. NOTE TO USER: User expressly acknowledges and agrees that, by downloading and/or using this Photograph, User is consenting to the terms and conditions of the Getty Images License Agreement Mandatory Copyright Notice: Copyright 2002 NBAE (Photo by Ezra Shaw/Getty Images)

“We couldn’t match up. And no offense to Kenny [Anderson] and Kenny’s my man but, Kidd was unbelievable for a couple of years. Those two years they went to the Finals. I don’t think there was any better point guard in the game better than Jason Kidd. Those two years when they went to the NBA Finals back-to-back; see people don’t understand we get ‘em in the Eastern Conference Finals we’re up 2-1, then we come back the following year and they sweep us in the second round but, those were epic battles man; we played that team probably like 30 times in two years it seemed like but, we couldn’t get past them. They were deep you know; Jason, Kerry Kittles, Keith Van Horn, Lucious Harris, Aaron Williams…they were loaded man, but they had our number for some reason. It was one of things that they had our number …read more

Vikings Cornerback Ruled Out Ahead of Week 2 Colts Matchup

I tried a hair-drying towel that claims to absorb 10 times its weight in water, and it actually cut my drying time in half

Read the pitch deck that buzzy startup Devoted Health used to reach a $1.8 billion valuation before it signed up a single customer