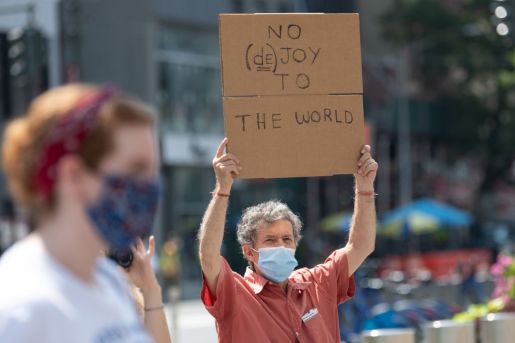 Alexi Rosenfeld—Getty ImagesA man at the “Save The Post Office” rally outside a post office building on August 25, 2020 in New York City.

Ronald Stroman, the former Deputy Postmaster General at USPS who resigned in June after nearly a decade at the organization, says USPS’s recent national outreach strategy marks a departure from previous years. During his tenure, Stroman recalled, USPS “had a very good working relationship with the states.” He was frequently in touch with Secretaries of State about mail-in-voting and would regularly brief election officials before voting started, he says.

An internal USPS election playbook for this year,

When the United States Postal Service’s internal watchdog published its assessment in August of what had gone wrong with mail-in ballots during this year’s primary season, its first recommendation was for federal Postal Service leadership to improve its communication with state and local election officials.

Since Postmaster General Louis DeJoy took the reins in June, multiple state officials tell TIME that communication from federal leadership has gotten both markedly worse—and more ham-fisted. Much of the outreach from federal USPS officials to both state officials and their constituents has resulted in fierce pushback and occasionally litigation. “It’s really been since DeJoy’s tenure that this has suddenly become a major issue, from a national perspective,” says Nellie Gorbea, a Democrat and Rhode Island’s Secretary of State.

“Historically, my office has had a good relationship with our local postmaster,” she says. “It’s not like we woke up this year and because we’re doing predominantly mail in ballots…we suddenly discovered we need to talk to the Postal Service.”

In interviews this week, half a dozen Secretaries of State told TIME that while they valued their partnerships with local Postal Service officials, communication problems with Washington were rife. “I distinguish between people in Minnesota who have been helpful and innovative,” says Minnesota Secretary of State Steve Simon. “The higher ups at the federal level in Washington seem tone deaf.”

One significant example of this failure of communication occurred earlier this month, when USPS began sending, without prior warning to Secretaries of State, millions of postcards to every voter nationwide, urging them to request a ballot at least 15 days before election day, mail their ballots at least seven days before and, if necessary, to make sure their envelopes were postmarked. The National Association of Secretaries of State (NASS), a bi-partisan organization was not informed of the mailing beforehand, according to the organization’s spokeswoman, Maria Benson. The information was inaccurate in some states.

Republican and Democratic election officials across the country—including in swing states like Nevada—urged their constituents to ignore the federal mailings. In Colorado, where every registered voter automatically receives a ballot, Jena Griswold, the Secretary of State, promptly filed a lawsuit alleging that USPS’ outreach will confuse and disenfranchise her constituents. A Colorado district judge subsequently issued an injunction, noting that the USPS’s postcard “provides false or misleading information about the manner of Colorado’s elections” and “will sow confusion amongst voters …read more