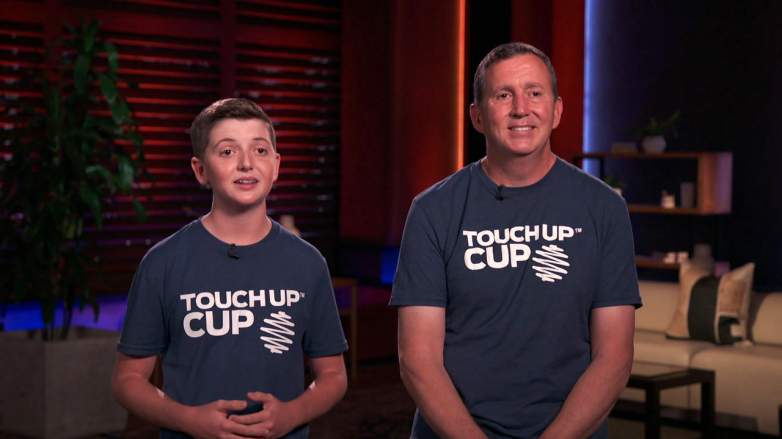 Carson Grill and his father, Jason, appeared on the season premiere of Shark Tank to pitch Touch Up Cup paint containers, their product that they believe is an important solution for the paint industry.

The young entrepreneur came up with his idea to solve a problem his family was having around the house, according to the Touch Up Cup website.

Here’s what you should know about Touch Up Cup on Shark Tank:

ABC Jason (R) and Carson Grill (L) pitch their product to the Sharks.

The inventor and founder of Touch Up Cup, Carson Grill, is only 15 years old and is currently a freshman in high school.

According to the website, he came up with the idea while painting with his father.

“They went to open just a few gallon cans when they realized the RUST, CLUMPS, and SMELL,” the website reads. “They quickly realized that their expensive paint had gone BAD! They looked at each other and said ‘There has to be a better way’.”

The website describes that they wanted a way for paint to stay fresh for years for the instances where someone has to touch up some paint from years before and wants to use the same type of paint they had used originally in order to match it exactly.

2. The Cup Will Keep Paint Fresh For 10 Years or More

Now, the family can keep their paint fresh for years and never have to worry about it rusting and going bad again, the website says.

3. Grill Has Come Up With Other Inventions As Well

ABCCarson Grill talks about his product on ‘Shark Tank.’