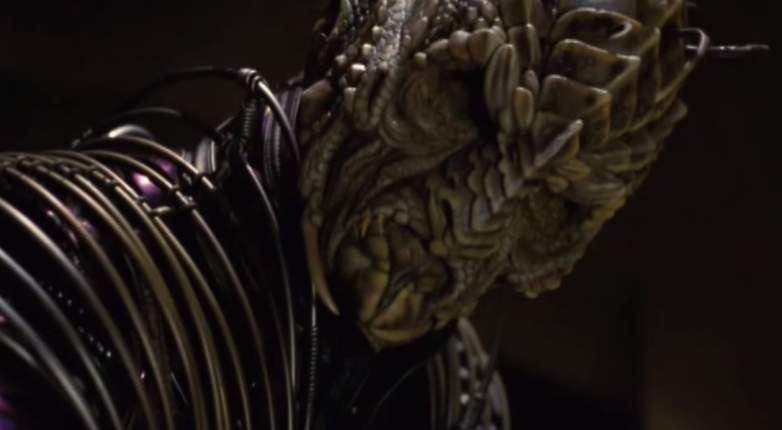 Jeffrey Dean Morgan is best known for his roles in The Walking Dead and Grey’s Anatomy. However, the actor is one of the many stars who appeared on Star Trek without much notice, perhaps because his face was completely buried under prosthetics and makeup.

Morgan never returned to the Star Trek universe after his single appearance in Star Trek: Enterprise. Apparently, the job was so awful it made him reconsider his career as an actor. He told the whole story to Sean Evans during an appearance on the YouTube series Hot Ones on April 1st.

‘Star Trek’ was ‘Horrible’ for Morgan

Evans and Morgan chatted about his career as they feasted on increasingly hotter chicken wings. Of course, the majority of the interview focused on his iconic character Negan from The Walking Dead. At one point though, Evans brought up Morgan’s single appearance in the Star Trek universe.

Morgan confirmed that being on Enterprise made him want to quit acting, then explained why his experience was so horrific.

“That feeling was on the nose. That job was on the nose, in a bad way. It turns out I’m claustrophobic. I had a really hard time doing the makeup process, and I had straws in my nose. I’ve never been on a set where I went home at night and just thought ‘what am I doing? I’ve made the worst f**king decision of my life. I don’t ever want to be an actor again…’ It almost made me quit. It was horrible.”

Luckily for fans of his incredible talent, he didn’t quit. However, he never took another role that required such an intense makeup process.

Morgan had to Deal With Some Serious Prosthetics

One glance at Morgan in his alien getup gives a good idea of why the process was so excruciating for him. He played a Xindi-Reptilian in the third season episode “Carpenter Street.” The role required an elaborate, full-coverage mask, as well as other prosthetics.

Morgan’s comment that he had “straws in his nose” refers to a common practice employed by actors who have to wear full masks for their scenes. The masks often have tiny nose holes, which makes it very hard to breathe. The makeup process takes several hours, so actors can’t just take off the mask whenever they want to get a full breath.  So, straws are inserted through the mask …read more

Why Utah’s delegation is frustrated over recent national parks funding