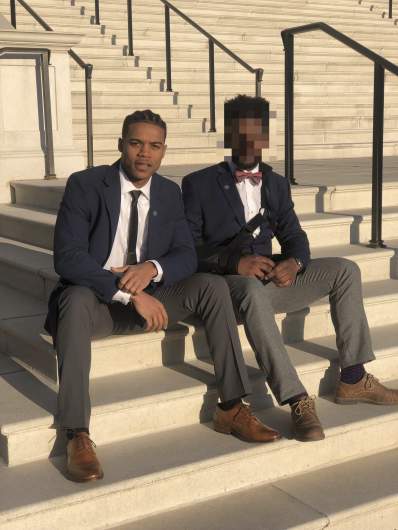 Noah Green, the deceased suspect in the Capitol attack that killed a police officer, filled his social media posts on Facebook with Nation of Islam ideology.

He wrote about “end times,” compared controversial Nation of Islam leader Louis Farrakhan to Jesus, and described a lengthy spiritual quest. An old athletic bio – the Virginia-born 25-year-old Green was a college and high school athlete – said he wished he could have met Malcolm X.

The Facebook page was quickly deleted, but not before Heavy saved the public posts. They don’t give a glimpse into Green’s politics per se because he didn’t write about the Republican or Democrat parties or about Joe Biden or Donald Trump or any other politicians. They do give a sense of his ideology and show a man who was fixated by the Nation of Islam religion, which has been described as a hate group.

You can see screenshots from the page below. No other social media accounts were immediately unearthed.

Capitol police say that the suspect rammed his car into two Capitol police officers manning a barricade outside the U.S. Capitol on April 2 before jumping out of the car with a knife and lunging toward the officers. They say he struck the officers with his car; police then shot him dead. Capitol Police Officer William Evans was killed. The second officer was taken to the hospital, but his condition was not released. Police say they aren’t sure what Green’s motive was and that they don’t think it was terrorism-related, but they also say they are still investigating.

Green Referred to Himself as ‘Noah X,’ Writing That ‘My Faith Is Centered on the Belief of…Louis Farrakhan as Jesus’

Facebook/Noah GreenNoah Green in a photo from his now-deleted Facebook page.

On Facebook, as recently as March 2021, the suspect wrote admiringly about Elijah Muhammad, the now-deceased Nation of Islam leader who was a mentor to Malcolm X. Green referred to himself as “Noah X.”

He wrote that his faith was helping him get through numerous life problems, writing, “I haven’t had much to lean on” because he faced “fear, hunger, loss of wealth, and diminution of fruit.” In another post, he said there was “much confusion in this day and age in my perspective,” citing “the ongoing COVID crisis, unemployment, rising National Debt, division within the political sphere, rumors of war and the like.”

The 6 most anticipated new movie releases in April, from ‘Mortal Kombat’ to Netflix’s ‘Stowaway’

Google extends its 5-day streak to 10% after US Supreme Court hands the tech giant victory in $9 billion battle with Oracle (GOOGL, ORCL)