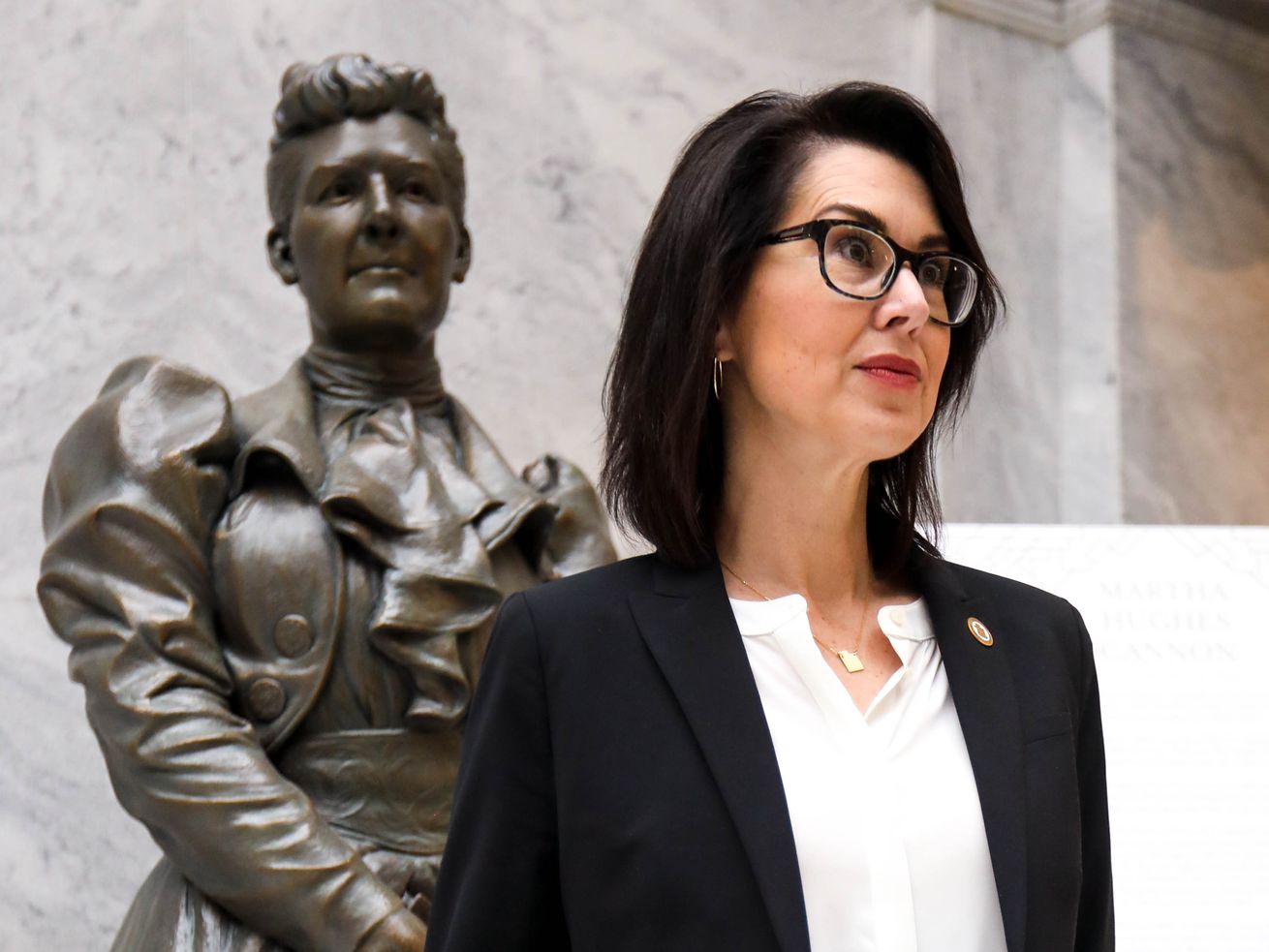 Lt. Gov. Deidre Henderson poses for a photo with a statue of Martha Hughes Cannon at the Capitol in Salt Lake City on Thursday, March 25, 2021. | Annie Barker, Deseret News

The plan was to have the statue of Cannon — who became the first woman state senator in U.S. history when she was elected to the inaugural Utah Legislature way back in 1896 — take its place in Statuary Hall in the U.S. Capitol last summer. It was to be part of the centennial festivities commemorating the passing of the 19th Amendment in 1920, giving women the right to vote.

Like everyone and everything else, the 550-pound statue made out of Utah copper has been in a holding pattern ever since. Its temporary place of residence is in the Utah Capitol, where it resides on the third level, not far down the hall from Henderson’s office.

Every chance she gets, the lieutenant governor likes to show Martha off. Over the past three years the two women, although centuries apart, have become quite close.

Henderson didn’t know that much about Martha Hughes Cannon back in 2018 when she was serving in the Utah Senate and learned that her colleague Todd Weiler was sponsoring legislation to replace the statue in the U.S. Capitol of television inventor Philo Farnsworth, a native of Beaver, with one of Cannon.

Each state gets two statues in Statuary Hall. Utah’s other statue is of Brigham Young.

As it happened, Henderson at the time had only recently returned from a trip to Washington, D.C., where she and her husband had taken a tour of the Library of Congress.

In the library’s main reading room, she was surrounded by beautiful ornate statues of both men and women.

It was only when she looked closer that she noted that the statues of men were of prominent historical figures such as Michelangelo, Sir Isaac Newton, Moses, Shakespeare, Plato and Beethoven.

Whereas the statues of women were only allegorical, depicting such things as art, history, freedom, commerce, poetry, science and law.

“The men were real men,” she said. “None of the women statues were actual women.”

As she continued her Washington …read more

(Visited 1 times, 1 visits today)
A woman’s place is in the Capitol
0
SHARES
ShareTweet

60 of the best spring sales happening now, including Leesa, Anthropologie, and Under Armour