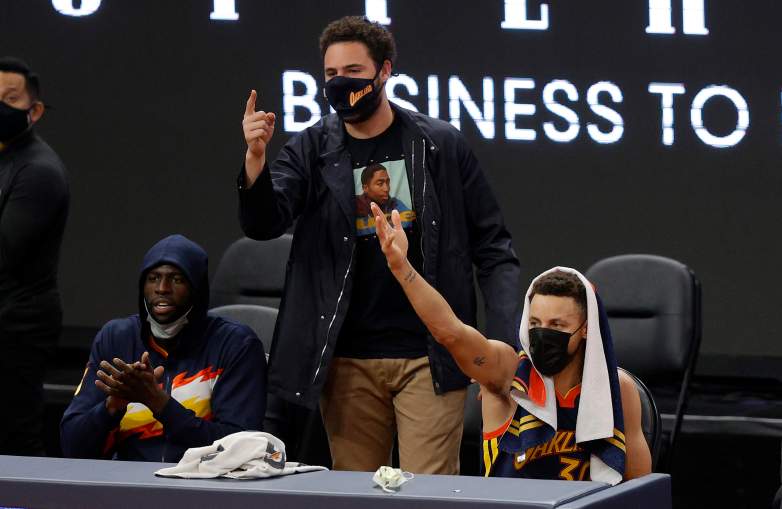 It was not a pretty game for the Golden State Warriors who were humiliated by the Toronto Raptors on Friday night. This wasn’t the first time this season that the team has been on the losing side of a blowout, however, this 130-77 loss just felt a lot worse. In what seems like a crucial part of the season as the team tries to land a playoff spot, the team is struggling to secure a win. This Warriors’ loss was so disappointing that it even had injured All-Star Klay Thompson fired up.

Thompson’s Message to the Team

The injured Warriors’ All-Star was in attendance during the 130-77 defeat on Friday night and had some pretty choice words for the team after the game. In his postgame press conference, Kent Bazemore discussed the impact that players like Thompson and Steph Curry have on the team and the difference of play without them.

According to Bazemore, it was Thompson who has suffered the most by his injury and in a heated outburst after the game pleaded to his teammates to put in more effort after yet another embarrassing loss. Bazemore also told the team that losing in this manner is completely unacceptable.

In his postgame interview, rookie Nico Mannion also went into detail about Klay’s outburst, saying that the veteran guard even approached some of the younger teammates after their loss. Mannion said that Thompson was in the hallway saying that the team just needs to have a little more heart in which he agreed with.

Thompson has experienced a tough past couple of seasons and it’s evident that it’s hurting him to watch his team get outplayed on the court knowing that there’s little to nothing that he can do to assist them.

After the Warriors’ 53 point blowout loss to the Raptors on Friday, Thompson was unsurprisingly livid with his team. Swingman Kent Bazemore went into detail in his postgame interview, and according to him, Thompson was visibly upset.

“It’s a hard pill for them to swallow. We talking about, these guys, five straight Finals appearances. This is, by any means, not acceptable by them at all. This hurts them more than anything. Klay was fired up after the game.”

Thompson traveled with the team to Tampa to face-off against the Raptors. He was even seen shooting around …read more

Bret Taylor, the likely successor to Marc Benioff, has quietly taken over important parts of Salesforce’s business — here’s who reports to whom at the highest levels of the company (CRM)

America’s newest airline is launching in April with a focus on leisure routes and fares as low as $19: Meet Avelo Airlines