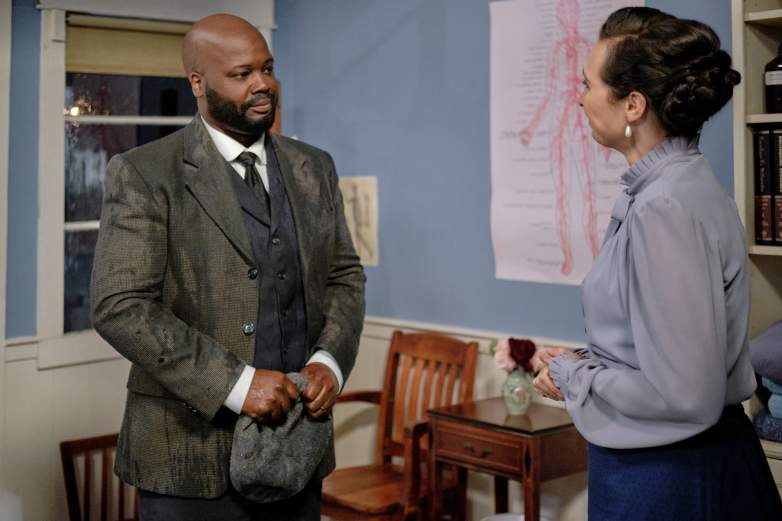 Last week on When Calls the Heart, Elizabeth and Lucas got very close to kissing, but Elizabeth pulled away at the last second. While this was a win for Team Lucas, Team Nathan got a win of their own when Nathan declared that he wasn’t ready to give up on his feelings. But all of that was pushed aside when Ned collapsed after trying on the beekeeper outfit that Florence gave him. Now a lot is hanging in the balance as the new episode begins.

This is a review of Hallmark’s When Calls the Heart Season 8 Episode 7, so there will be spoilers in this article.

What an unexpected surprise! 🥰🥳 Help us congratulate Florence and Ned, #Hearties! #WhenCallsTheHeart pic.twitter.com/EeMDByJBkB

Ned and Florence’s love story was the focus that all the other stories hinged upon this week, and that’s exactly how it should have been. They really are the sweetest couple.

Ned was in really bad shape when last week’s episode ended. And when the new episode begins, Florence is at Ned’s side, waiting for word about his condition. Faith and Carson aren’t sure what’s going on with him, and they’re second-guessing their decisions.

When Elizabeth stops by to check on Ned, she learns that Faith and Carson think they might need to operate because Ned’s getting worse. Just before his surgery, Ned asks Florence to marry him.

“You just think about getting well,” Florence says. But Ned asks again, and when Florence is sure that he’s certain, she says yes.

It’s an amazing moment, but also really sad because it’s simply not clear what’s in store for Ned. The next day, Carson tells Elizabeth that they did everything they could, but he’s not sure it will be enough. It’s already looking like Ned is going to need more transfusions, and Florence is devastated by the news.

While Ned is unconscious, Florence sings to him. It’s a heartbreaking scene, and just moments later they realize that they need to operate again. Ned’s not doing well. But eventually, he makes a turn for the better. After …read more