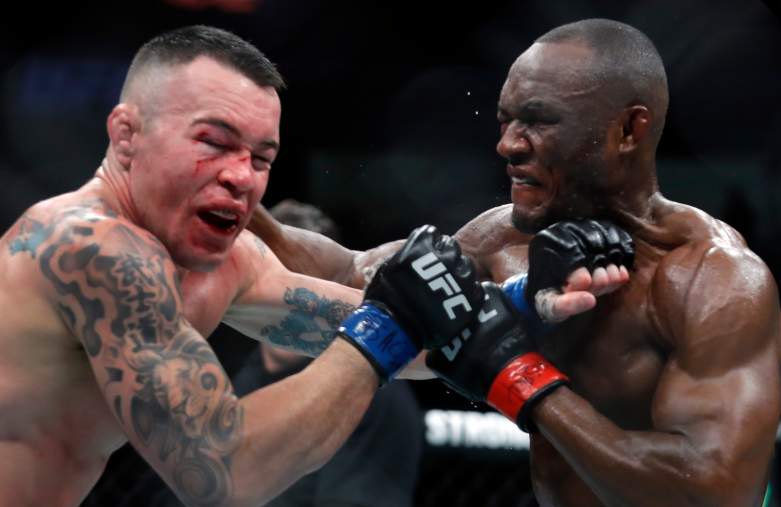 Ahead of his rematch against Jorge Masvidal at UFC 261 on April 24, welterweight champion Kamaru Usman spoke with ESPN’s Brett Okamoto. And during the interview, “The Nigerian Nightmare” spoke about his foe, No. 1 ranked Colby Covington.

Usman asserted that “Chaos” needs to get back inside the Octagon and earn another victory before challenging him for the welterweight strap again. The two fought at UFC 245 in December 2019 in what was one of the most exciting welterweight title showdowns in UFC history.

It was a back-and-forth battle and in the end, The Nigerian Nightmare finished Chaos in the fifth round via TKO. Since then, Usman has gone on to defend his belt two more times, defeating Masvidal by unanimous decision and Gilbert Burns by third-round TKO.

“Show me some activity,” Usman said via ESPN. “Give me a reason. It’s not necessarily me. I know what I’m capable of doing. I’ve done it before. You can ask his jaw; I’ve done that before. Now, it’s for him to show the people that he deserves another chance to fight for the title. You can’t sit back and say, ‘Oh, I beat Tyron Woodley. That’s it. I deserve a shot at the title.’ No. That doesn’t give you a title shot.”

Hours after ESPN shared Usman’s interview on Tuesday, Covington took to Twitter to respond to the 170-pound champ. Chaos accused The Nigerian Nightmare of taking what he believes is an easier fight in Masvidal as opposed to the tougher fight, a rematch with him.

“Spoken like a true coward who doesn’t want to face the rightful #1 contender,” Covington wrote. “The rankings have chosen and so have the people Marty. Just say the truth: you know you can’t win and you’d rather fight bums like Street Judas for easy pay checks. @USMAN84kg.”

The latest UFC news straight to your inbox! Subscribe to the Heavy …read more

Bitcoin is at its lowest level in nearly a month. 2 experts explain why they see more weakness ahead.