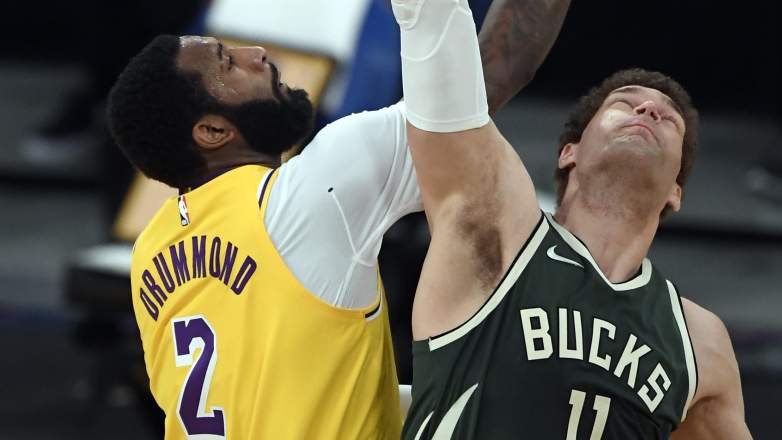 Jimmy Butler had a message for the Los Angeles Lakers after Andre Drummond was switched onto him in the fourth quarter of their matchup on Thursday night.

“Don’t do that,” Butler could be seen saying on the TNT broadcast while pointing his finger, just seconds after hitting a jumper over Drummond.

The NBA Finals rematch wasn’t as highly-anticipated as it was when it was first put on the schedule, with the Lakers missing Anthony Davis, LeBron James and Kyle Kuzma. The shorthanded Lakers kept it close, but the Heat managed to pull away late for the 110-104 win — Miami’s fourth win over their last five games.

Butler finished with a packed stat line, posting 28 points, 7 rebounds, 5 assists and 3 steals. Butler scored 10 points in the fourth quarter and put the game away with key free throws down the stretch.

“You always take the dub in this league. They are very hard to come by, especially against the Lakers,” Butler told reporters in his postgame press conference. “We can be better.”

After having his debut cut short due to a toe injury, Drummond played 27 minutes against the Heat, notching 15 points and 12 rebounds in the loss.

Drummond was a force around the rim in the loss but there was still lots of room for improvement.

“This being my first real game I played, it felt good being out there,” Drummond said after the game. “I’m still trying to figure guys out. I caught myself running into guys a few times.”

Lakers coach Frank Vogel, who has repeatedly backed Drummond as the starter, was pleased with what he saw.

“Drummond was great,” said Lakers coach Frank Vogel in his postgame Zoom. “He competed, he does what he does, 15 and 12 in 26 minutes, four offensive boards, great screener, active hands defensively. Offensively, there’s a lot to learn still within our system, both sides of our ball, learning our teammates. Good first full game.”

New guard Ben McLemore also made his debut in purple and gold, scoring six points — four of those coming from the free-throw line.

Marc Gasol Does Not Play Against Heat

With Drummond in the lineup, veteran big man Marc Gasol did not leave the bench against the Heat. Gasol started the last two games with Drummond recovering from the lost …read more

California hospitality workers laid off during the pandemic must get priority access to jobs with former employers, a new law says

Earnings-growth expectations are at their highest in nearly 20 years after downward revisions were ‘too aggressive’ (INX, DJIA, COMPX, NDX, RUT, RUI)