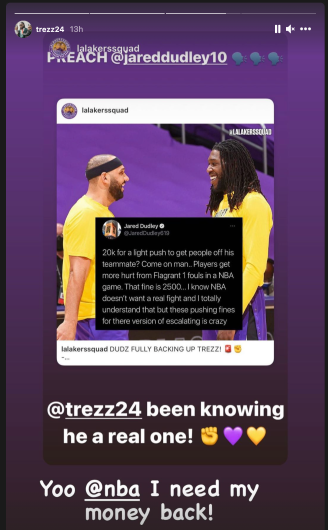 Montrezl Harrell avoided a suspension after a physical altercation with the Toronto Raptors, but the Los Angeles Lakers big man was hit hard in his wallet with a $20,000 fine.

Lakers guard Dennis Schroder, who Harrell was swooping in to protect, is going to make sure he doesn’t have to pay that money, offering to front the cash for the fine.

Schroder is making more than $6 million more than Harrell this season, so he can spare the $20,000 for his on-court bodyguard.

Schroder, Harrell Not Happy With Raptors After Skirmish

Schroder found himself on the floor against the Raptors after getting his legs swept and tossed by OG Anunoby. Harrell hurried in like a bull in a china shop to defend his guy.

“I fouled [Anunoby] but tried to still pick him up. It’s not a dirty play and I didn’t want him to get hurt, and he clearly didn’t get hurt, and I picked him up. And then after that he just shoved me on my back,” Schroder said after the altercation. “With Trezz I would do the same thing for everyone in this locker room. We’re all brothers, family, so after it happened and he got ejected, I went into the locker room during the game and I told him that I appreciate him, and that I would do the same thing for him. So I’m really thankful for that one.”

Harrell was clear that he had no regrets and would do it again if he had to.

“That’s uncalled for, and I’m going to defend my teammates just like I would do any other time, just like the way I would do any other player or if it was to happen over again, man. That’s not the way you do things, man. He literally grabbed his leg and dropped him right on his back,” Harrell said. “It’s wrong, I don’t really think I did anything wrong to be ejected, but it is what it is.”

While the parties pushing on …read more