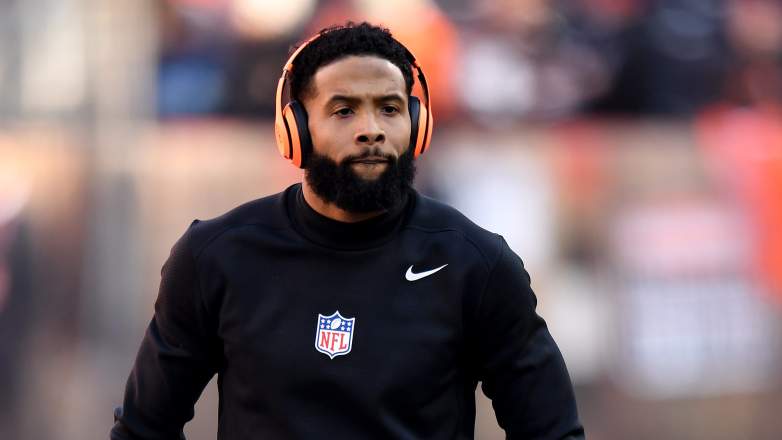 Odell Beckham Jr. deactivated his Instagram last month, but luckily for Cleveland Browns fans, Odell Beckham Sr. is still delivering the goods on social media when it comes to the star wide receiver’s progress as he works back from a torn ACL.

Beckham has been unable to share his progress since saying “goodbye” on social media on March 29. But his dad delivered the latest progress report, with the three-time Pro Bowl pass-catcher looking strong in his workouts. As the hashtag says, OBJ is staying the course as he builds momentum for his return to the gridiron.

No Instagram for @obj but he’s still putting in the WORK 😤 pic.twitter.com/aoKWV3JOVg

Beckham’s season ended abruptly with a torn ACL in October. Prior to the injury, he recorded 23 catches on 43 targets for 319 yards and three touchdowns, also adding a rushing score.

While the Browns’ passing game sputtered at times with Beckham in the lineup, it wasn’t until the back half of the season when quarterback Baker Mayfield gained a full grasp of head coach Kevin Stefanski’s system. That was unfortunate for Beckham, who watched as Cleveland punched its ticket to the postseason and then knocked off the Steelers for the franchise’s first playoff win in over a quarter-century.

Beckham spent 2019 — his first year in Cleveland — banged up, needing offseason core surgery and relentless rehab to get back to full-strength. He collected 1,035 yards and four touchdowns, failing to meet the wild expectations that came when he was dealt to the Browns.

Browns Ready to Welcome Beckham Back

Beckham’s future in Cleveland is a constant topic of debate, with his name being a consistent piece of trade rumors. He recently clapped back over the various rumors on Twitter, responding to a comment from a fan.

“It’s funny how when Odell Beckham is mentioned as a trade target he’s a dynamic playmaker but when he’s mentioned as a Brown he’s a washed-up has-been,” the initial fan-tweet read.

Beckham responded: “It’s a Cold War! Skins thick tho, im just workin to be the very best I possibly can on that field next year! To the supporters! I’m workin … love u all.”

The Browns have shut down the trade talk surrounding Beckham at every turn, which was also the theme when general …read more

Goldman Sachs responded to burnout fears in its consumer division by making evenings and Fridays ‘audio only,’ encouraging staff to go for walks and talk on the phone instead