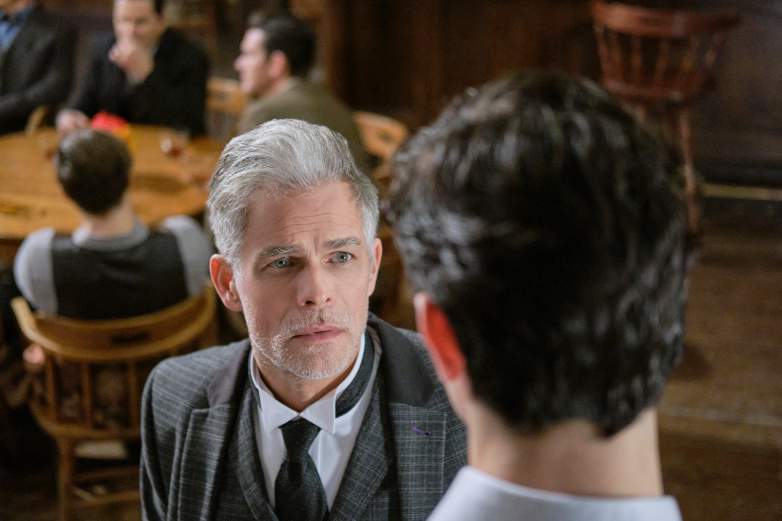 In the next scene, Christopher explains to Henry what was going on with the stolen car. He says that he didn’t steal it, his friend did, and he had just taken it to town and just ditched it. Not a wise move, by any means. And I’m not even sure if I believe him, considering that he had stolen Lee’s pocketwatch.

It all worries Henry. “I just don’t want you ending up like me,” Henry tells him. It seems neither one realizes quite how obsessed Bill is with the stolen car mystery.

Henry sees Christopher off at the stagecoach. He’s headed to Bellingham to visit Rachel. Chris was about to tell Henry why he came to Hope Valley, but Henry stops him and says he doesn’t need to hear it. 💗

Hallmark’s When Calls the Heart Season 8 Episode 9 picks up right after Nathan finally revealed to Elizabeth what he had been hiding about Fort Clay. Now, as Ned and Florence prepare for their wedding, Elizabeth is dealing with Nathan’s confession and all the heartbreak from Jack’s death coming back to the surface. But how long can Lucas and Nathan continue to be patient as they wait for her to work through this? And who will be hurt in the fallout?

This is a When Calls the Heart Season 8 Episode 9 review, so this article will have spoilers.

Oh my! Rosemary & Elizabeth are now at odds! 😢 I just want to give them both hugs! @erinkrakow @HuttonPascale @hallmarkchannel @SCHeartHome #Hearties pic.twitter.com/hckOsqrLRu

When the episode begins, Elizabeth confesses that ever since Nathan revealed the truth about what happened at Fort Clay, she’s been left to reflect again on the accident that took Jack’s life. And she’s wondering why Nathan kept everything hidden from her.

She tells Rosemary that the only thing that makes sense to her is the love she feels for her son. But their talk quickly turns back to Jack and Nathan. Rosemary says that maybe Nathan never told her because he just didn’t think it was important enough to warrant making Elizabeth upset and stirring up those feelings again. Jack’s death wasn’t Nathan’s fault, she tells Elizabeth. But Elizabeth doesn’t understand why Rosemary felt the need to tell her that, and now she just feels more upset.

Honestly, I feel the worst for Elizabeth in all of this. She was starting to move on, and now all those difficult feelings have been stirred up again, making them feel fresh all over again. This has to be why she’s so sensitive to everyone and taking things wrong. But a lot of people might get hurt before she realizes what’s going on.

Oh dear, Florence’s discriminating taste is proving a challenge at the dress shop.🙁 Molly and Rosemary have shown her dozens of options, but so far, they’ve all been no’s. The search continues! 👗#Hearties @loretta_walsh @JoNewmarch @HuttonPascale pic.twitter.com/eddStGTWmy

How long does protection from COVID-19 vaccines last?