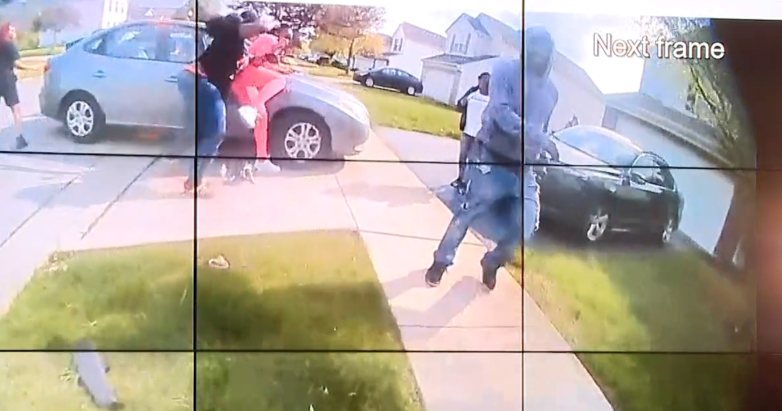 Columbus, Ohio, police released graphic body cam video showing the Columbus police shooting of 16-year-old Ma’Khia Bryant. You can watch the video in this story, but be forewarned that it is very disturbing.

Bryant was shot and killed by an officer in Columbus shortly before the verdict in the Derek Chauvin case was already focusing renewed attention on police-related deaths.

Police said that the girl shot was a “Female with a knife trying to stab” another person when shot. The body cam video shows the officer arriving to a chaotic fight scene, with Bryant attacking another female, who falls on the ground, before moving toward a second woman near a car, police say with a knife. The officer then shoots her dead.

Body cam videoBryant is in the blue jeans by the car.

Other graphic videos emerged from the scene, which you can also see throughout this story. Protests erupted.

Bryant’s name was confirmed by her family to ABC6 and other local news stations. The circumstances of the shooting are still under investigation. The shooting happened on April 20, 2021, sometime between 3:45 p.m. and 4:30 p.m. Some sites gave her name as Makiah Bryant, Makiyah Bryant or Makhia Bryant, but her mother confirmed to 10TV reporter Lacey Crisp that the correct spelling is Ma’Khia Bryant. Other reports gave her age as 15, but her mother told local journalists she is 16.

Family Members Expressed Anger at the Scene, Describing Ma’Khia as a Loving Person

A woman who said she was Bryant’s aunt told reporters the girl was a loving person who didn’t deserve to die “like a dog in the street.”

Crisp wrote, “Paula Bryant tells me her 16 year-old daughter Ma’Khia Bryant was an honor roll student and a sweet child. Ma’Khia was shot and killed by a Columbus Division of Police officer on Legion Lane at 4:30p today.”

Columbus Mayor Andrew Ginther confirmed the girl had died. “This afternoon a young woman tragically lost her life. We do not know all of the details. There is body-worn camera footage of the …read more