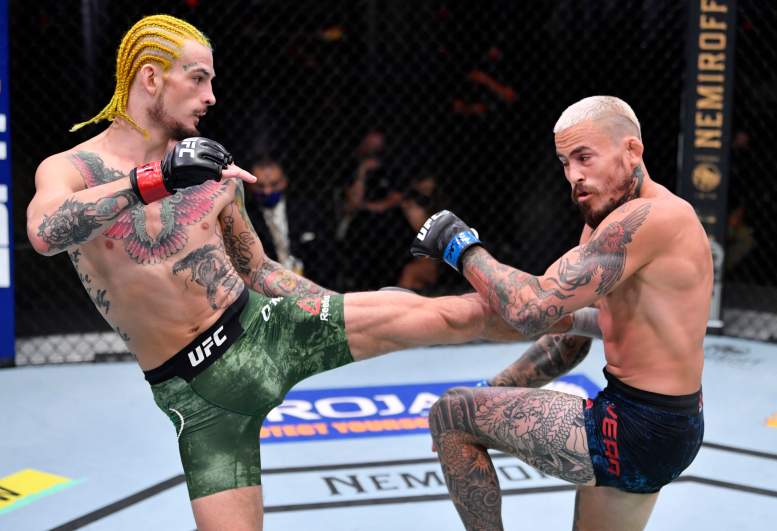 A star was “upset” with color commentator Joe Rogan‘s comments during their fight at UFC 260 last month.

March 27 marked a major comeback for UFC bantamweight “Sugar” Sean O’Malley, earning a showstopping third-round KO of Thomas Almeida during the event’s main card. It was O’Malley’s first bout since suffering the first loss of his professional MMA career.

And according to Sugar, he’s not happy with Rogan’s assessment of how he lost that fight.

O’Malley lost via first-round TKO to Marlon “Chito” Vera last August at UFC 252. O’Malley’s leg was comprised courtesy of Chito’s low kick and it led to O’Malley being finished by ruthless ground strikes.

GettySean O’Malley (L) kicks Marlon Vera in their bantamweight bout during the UFC 252 event at UFC APEX on August 15, 2020 in Las Vegas, Nevada.

Appearing on a recent episode of Food Truck Diaries with former UFC heavyweight Brendan Schaub, O’Malley outlined his issue with Rogan’s commentary at UFC 260. Sugar believes Rogan put too much emphasis on Chito’s leg kicks. O’Malley maintained that he landed the bigger blows to his opponent’s lower half and that it was the toe of Vera that affected the nerve of his leg, something that “hasn’t happened since.”

“I was very upset with Rogan’s commentary on my fight,” O’Malley said via MiddleEasy.com. “He was just saying how Chito kicked my leg off me, beat my leg up. You go watch that, I kick his leg way harder, way more than he kicks mine.

“When I was fighting Chito, I pulled out, and literally his big toe hit that nerve and I got dropped,” O’Malley added. “Joe said ‘It happens all the time, it happened to Michael Chandler.’ It doesn’t (happen all the time). It hasn’t happened since my fight.”

The latest UFC news straight to your inbox! Subscribe to the Heavy on UFC newsletter here!

The top 9 streaming TV shows of the week, including Netflix’s ‘Shadow and Bone’