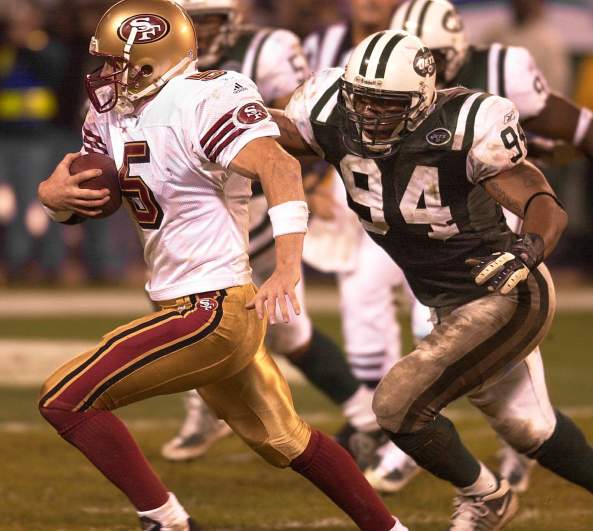 The New York Jets had the second-most cap space in the NFL heading into free agency and filled several voids on the roster. Despite doling out over $75M in guaranteed money this offseason, this team still has several gaping holes that they’ll now be forced to address in the 2021 NFL Draft.

Fortunately, the team is armed and dangerous with 10 draft picks, half of those coming in the top-100 of this class. But what are the top needs for the team?

Depending on who you ask, this is a much higher need on the New York Jets’ wish list.

The team hasn’t had a consistent edge rusher that opponents have had to fear since John Abraham. To put it bluntly, it has been a constant barrage of mediocrity including last season when the team ranked in the bottom half of the league in sacks per game, per Team Rankings.

GettyThe last time the New York Jets had an EDGE that opponents feared was John Abraham.

Over the last 15 years, the Jets have had three double-digit sack single seasons and that’s it. Muhammad Wilkerson did it twice (2015 and 2013) and Calvin Pace somehow did it in 2013.

This offseason the team added an All-Pro worthy talent in Carl Lawson formerly of the Cincinnati Bengals. Plus a slew of rotational pieces (Sheldon Rankins, Vinny Curry), but they still need an edge rusher opposite of Lawson.

Joe Douglas has proven to be a “best player available” kind of guy, albeit it with a very small sample size. If one of the top edge rushers slips to 23 or 34 in the 2021 NFL Draft, you could see the New York Jets leap at the opportunity. Although the third round (where the Jets have a pair of draft selections; 66, 86 respectively) may be the more apt place to take a dive into the rookie EDGE class.

Arguably the most underrated need for the New York Jets this offseason is linebacker. We mentioned previously that the new head coach Robert Saleh is bringing his patented 4-3 scheme with him from San Francisco.

It’s paramount to have linebackers that can cover. Whether that be covering running backs out of the backfield or matching up with opposing tight ends.

Alberta opioid deaths continue to spiral, with 228 in first two months of 2021