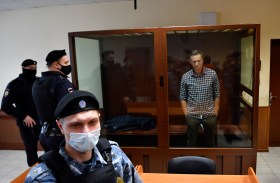 Pavel Bednyakov—Sputnik/APNavalny waits in a courtroom during a hearing on appellation to cancel the decision to replace his suspended sentence in the Yves Rocher fraud case with a jail term at Babushkinsky Court, Moscow, on Feb. 20.

Presumably Navalny would rather Sullivan got his retaliation in first, as a form of deterrence. But neither the U.S. nor E.U. seems eager to impose sanctions before Navalny’s demise. And Angela Merkel, once Navalny’s primary caretaker-in-exile, has reaffirmed her commitment to

“If you saw me now—maybe you would have a good laugh,” Alexei Navalny wrote on Facebook April 20. “Look at him! A skeleton walking, wobbling around his prison cell. In his hands he is holding his court ruling, rolled up in a tube. With that tube he fervently swings away at mosquitoes covering the walls and the ceiling of his cell. Those buzzing stinging monsters can finish up a man faster than any hunger strike.”

The tone is characteristic of the world’s most famous political prisoner: comic stoicism in the face of approaching death combined with a Gogolian fascination for all the absurdities and trivialities still imposed by a cruel Russian system responsible for its arrival.

Navalny has been starving himself for three weeks. It is a feeble protest, perhaps, against being an involuntary guest of a 21st century gulag, but at least it is wholly his own. For someone who eight months ago was almost killed with a weapon of mass destruction (Novichok), Navalny seems determined to go on being Navalny until the very end, which could be “any minute” now, according to his physician who has not been allowed to examine his patient and can only make diagnoses from afar, based on blood test results.

Navalny risks kidney failure and cardiac arrest owing to abnormally high levels of potassium and creatinine in his blood (“After Novichok,” Navalny wrote, “potassium is not a biggie”). He has been transferred from one miserable penal facility to another where he is now on a regimen of “vitamin therapy.”

No one believes Navalny is being treated; rather, he is being gradually murdered in an internationally exhibited snuff film executive produced and directed by Vladimir Putin.

“I think they will kill him,” a former senior U.S. official, someone I typically turn to for good news, not bad, told me this week. “I don’t think they’ll do a last-minute release back to Germany [where Navalny recuperated from his Novichok poisoning last August] or something like that. Their goal is to watch Navalny slowly die in prison.”

And what can the United States do, or better yet, what is it willing to do to stop “them” and this obscenity? Judging by President Joe Biden’s rhetoric, not much. Navalny’s plight, Biden told reporters last week, was “totally, totally unfair, totally inappropriate,” which is something one says of a lousy referee call on the pitch, …read more