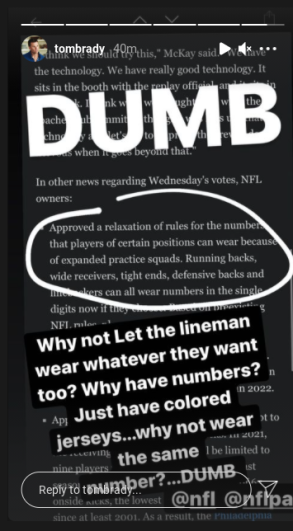 On Wednesday, the NFL owners “approved a relaxation of rules” for jersey number designations by position according to ESPN’s Kevin Seifert. Notably, the multiple position groups could start wearing single digits: defensive backs, linebackers, running backs, tight ends, and wide receivers. The NFL made the change “because of expanded practice squads” Seifert reported.

Brady ranted about it on two Instagram stories on Thursday. He wrote, “why not let the lineman wear whatever they want, too? Why have numbers? Just have colored jerseys … why not wear the same number? … Dumb.”

“Good luck trying to block the right people now,” Brady added in his second Instagram story. “(It’s) going to make for a lot of bad football.”

Brady included the jersey number breakdown by position from the league in his second post. Quarterbacks, punters, and placekickers can wear numbers 1-19 while defensive backs can take numbers 1-49. Running backs, tight ends, and wide receivers can don 1-49 and 80-89. Offensive lineman can choose 50-79, but defensive linemen get 50-79 or 90-99. Linebackers get almost everything with 1-59 and 90-99.

Ironically, Brady looked at taking the No. 7 in 2020 when he joined the Bucs in free agency because wide receiver Chris Godwin wore No. 12, which Brady had in New England. Godwin switched to No. 14 so Brady could wear No. 12 again.