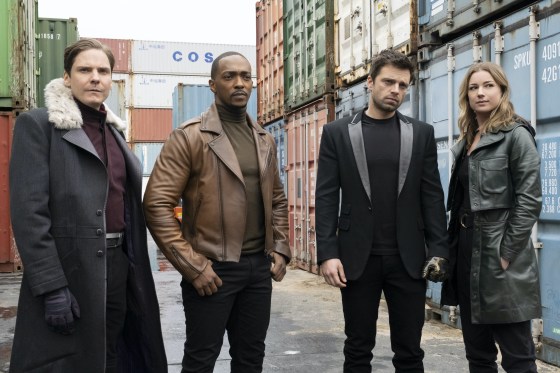 It was Sharon all along. She may not get a

This post contains spoilers for The Falcon and the Winter Soldier.

The Falcon and the Winter Soldier managed to jam a lot of plot into just six episodes of television. Sam Wilson struggled with whether to take on the mantle of Captain America—and whether the country was ready for a Black Cap. He discovered that the government had created, and then jailed, a Black Captain America before him, Isaiah Bradley. He also had to contend with a so-called terrorist organization, the Flag Smashers, who used questionable means to reach noble ends of helping refugees.

Meanwhile, Bucky Barnes was trying to make amends for the evil he did as the Winter Soldier; Sharon Carter had become a black market art dealer in Magipoor; Baron Zemo was hunting down and killing supersoldiers; John Walker, the new Captain America, was letting his newfound power go to his head; a mysterious new villain played by Julia Louis-Dreyfus made a cameo; and Sam’s sister worked to fix up their family’s boat. Like I said, a lot of plot.

The season finale wrapped up most of these storylines and hinted at what the future might look like for all of these characters in the MCU. But you might have lost track of all the moving parts. Here, all our lingering questions answered.

Read More: Everything You Need to Know About The Falcon and the Winter Soldier

Who is the Power Broker?

It was Sharon all along. She may not get a fun tune like Agatha did in WandaVision, but many fans probably guessed that Sharon Carter was indeed the power broker.

Marvel Studios Emily VanCamp in Falcon and the Winter Soldier

I don’t know what to tell you. It seems crazy that Bucky, whose killed hundreds (thousands?) of people, including Tony Stark’s parents, got a pardon and Sharon Carter—good friend of Nick Fury, niece of Peggy Carter, onetime love interest of Captain America (which, she winds up being his niece by marriage, so ew)—didn’t get a pardon. Something is fishy here.

Nevertheless, Sharon was forced to go underground and operate as the Power Broker, a black market art dealer, funder of supersoldier serum projects and general shady person. Whether Sharon Carter is a bad person is up for debate. She did seem to acquire some Jason …read more

For Rosa Reveals The Ugly History Of Forced Sterilizations

Meghan Markle: Did Megxit Seal the DOOM of the Royal Family?