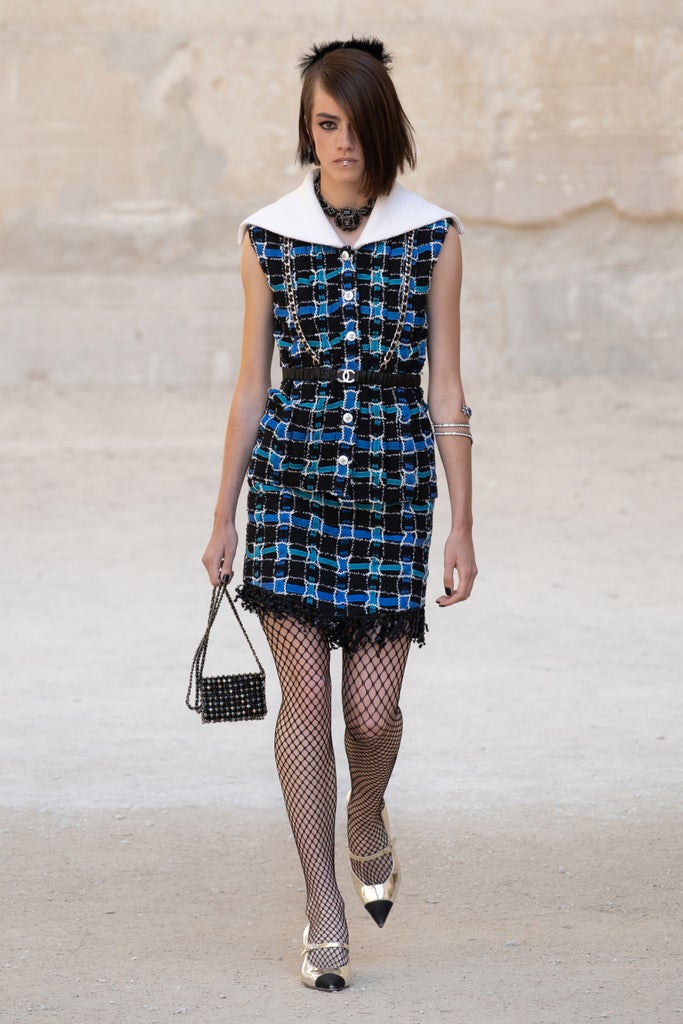 Never underestimate the power of accessories. On Tuesday, Chanel presented its cruise ‘22 collection which, in addition to midriff-baring tweed sets and coat dresses, included its fair share of out-there accessories. In fact, it was said accessories, from handbag chain harnesses to quilted leather garter belt bags, that stood out most.

Against the backdrop of a former quarry in Provence, France, models walked to trance music by Sébastien Tellier, Angèle, and more while covered in punk-inspired accoutrements that included fishnet tights (Jill Biden is vindicated!), miniature neckties a la Avril Lavigne, heavy chain belts, and chokers. Though long known for its handbags and shoes, the French house, under the guidance of creative director Virginie Viard, used this collection to move away from its quintessential quilted flap bags and tweed slingbacks. Instead, Viard debuted a more daring and youthful approach to the house’s signatures.

Jewelry-wise, models switched off between cross pendants and extra-long, tangled chains reminiscent of the early ‘00s. Upper arms were decorated with cuffs, while wrists were adorned with chunky metal bangles. Arguably the most unexpected addition was the CC lip ring worn by many of the show’s models. According to Vogue, their addition was inspired by the late Stella Tennant’s “punk attitude” — the supermodel once refused to take out her septum piercing for a British Vogue shoot, according to W — as well as photographs of model Lola Nicon dressed as a “punk heroine,” taken at Gabrielle Chanel’s apartment in Paris prior to Tuesday’s show. “I wanted something quite rock,” Viard said in the show notes.

With Chanel’s stamp of approval, we’ll be considering a lip piercing of our own — or more likely, a clip-on version — in the near future. Leather harnesses, garter bags, and neckties, too.

Watch the show, below.

Like what you see? How about some more R29 goodness, right here?

The Pandemic Oscars Were Surprisingly Decent. But Will the Academy Learn Anything From Its Break With Tradition?

Why Is It Still Legal To Physically Punish Kids In School?