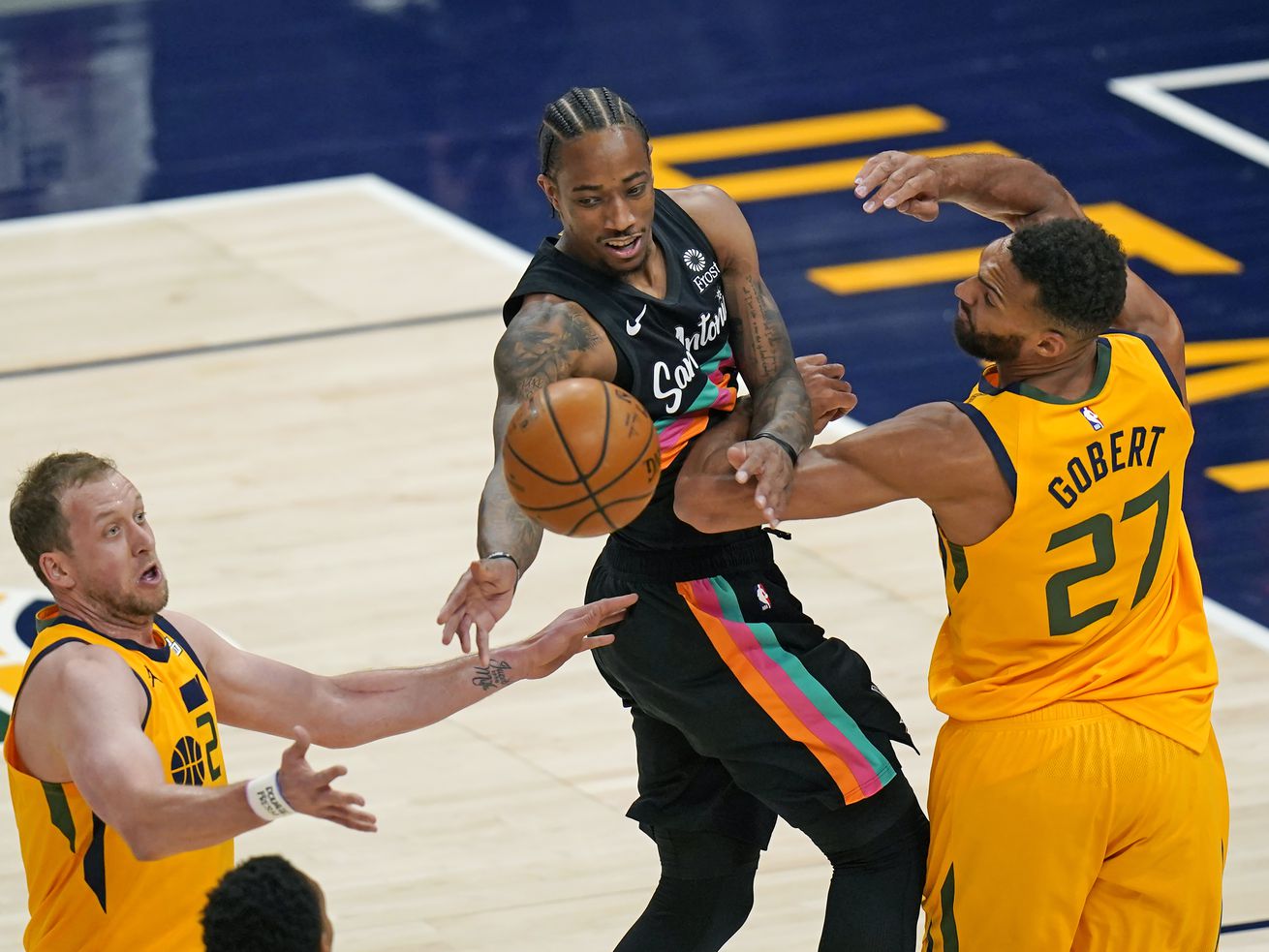 It was business as usual for Utah’s big man against the Spurs Monday night: 24 points, 15 rebounds, two steals and three blocks

On Monday night, 90 minutes before the Utah Jazz hit the court to take on the San Antonio Spurs, Jazz coach Quin Snyder was asked about Rudy Gobert’s evolution and growth on the defensive end.

“You see his impact in so many different ways, transition defense maybe being the biggest one,” Snyder said. “Him being able to get back on defense just solidifies our defense to a whole other level.”

Those words would prove prophetic in nature.

Less than five minutes into the Jazz’s 110-99 win over the Spurs, Gobert raced back in transition and completely shut down a San Antonio fast break.

Gobert’s size, strength and ability to protect the rim deterred three different Spurs players from even trying to score. First it was DeMar DeRozan, whose steal started the break. He dumped the ball off to rookie Devin Vassell rather than have his shot blocked.

Vassell didn’t want any part of Gobert either and pivoted to find someone else. Finally the ball ended up in Dejounte Murray’s hands and with one look at who was waiting for him in the paint, he changed his mind and dribbled the ball out of the paint.

Gobert saw Murray decide not to come his way and nodded as if to say, “That’s right, coming in here would be the wrong decision. You know what the deal is. It’s a good idea to run away.”

Your quick version of Rudy turning back 3 Spurs in the 1st quarter, then nodding to tell them “That’s right!” pic.twitter.com/CZOPJczRdg

Humiliating the competition is something that energizes Gobert and when it happens early on, as it did Monday, there’s almost no way to keep him from dominating a game.

“When guys get the ball and they think they’re going to have an open layup and all of a sudden they just get blocked, or they see me and they think that it might be better if they don’t shoot, I think it’s a little demoralizing,” …read more

(Visited 1 times, 1 visits today)
To fully appreciate Rudy Gobert’s defensive prowess, you have to look beyond the numbers
0
SHARES
ShareTweet

Kahun back with McDavid: When it comes to the forward line blender, Tippett slices and dices with the best of them

The Edmonton Oilers clinch a playoff spot in a dominating 5-3 performance over the Vancouver Canucks: Game Grades