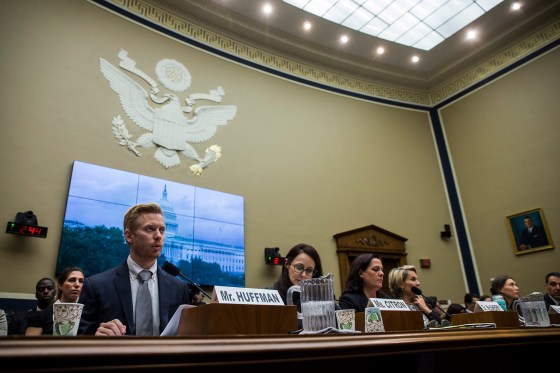 Zach Gibson—Getty ImagesReddit Inc. co-founder and CEO Steve Huffman looks on during a hearing with the House Communications and Technology and House Commerce Subcommittees on Oct. 16, 2019 in Washington, DC. The hearing investigated measures to foster a healthier internet and protect consumers.

Reddit, founded in 2005, is essentially a messaging board, but it could be compared to a high school extracurriculars fair. The site comprises hundreds of self-contained forums arranged by varied interests, from sports to makeup to art to pets. While many of these subreddits are innocuous, it’s no secret that Reddit has long been a haven for unseemly behavior. Reddit CEO, Steve Huffman, even explicitly stated in 2018 that racism was not against Reddit’s rules, elaborating that “on Reddit there will be people with beliefs different from your own, sometimes extremely so.”

However, over the two years—following intense criticism rained down on the company over its hate speech and harassment policies, including in the wake of the murder of George Floyd—the company backed away from its original hands-off ethos and has been hard at work to clean up its communities and clamp down on noxious, racist behavior. Toxic communities like r/The_Donald have been banned; AI-powered tools aimed at curbing hate speech and abuse have been rolled out; backchannels between moderators and company employees have been established.

But many non-English moderators say that cleanup has not extended to the pages they monitor. R/India is one of the largest national subreddits, with 693,000 members. There, users will typically find a fairly tame mix of news links, memes and local photos. That’s partly down to the hard work of unpaid moderators to remove Islamophic content. A group of five r/India moderators, speaking to TIME over a Zoom call, say they can spend several hours a day actively responding to queries, removing hate speech and banning rogue accounts. (Old moderators approve the applications of new ones; the primary draws of the gig, according to moderators, are community-building and the ability to help shape a discourse.)

One moderator for r/India has served in his role since 2011, when there was a more laissez-faire approach. Moderators soon realized that a hands-off moderation style “wasn’t working because it allowed the worst people to dominate the conversations,” he says. “There would be lots of people just saying things like ‘Muslims need to die.’”

When moderators began to block these users, some would simply return with a new account and taunt them, creating an endless game of whack-a-mole. Moderators say they saw other users instead start or join offshoot groups that allowed more controversial posts.

The largest of those r/India offshoots currently is r/Chodi, which was created in 2019 and has 90,000 members who create hundreds of posts a day. R/Chodi—which translates as a crude slang in Hindi—contains ample examples of far-right Hindu nationalism that often spills over into hate speech and sectarian bigotry. Dozens of posts a week denigrate Islam, often depicting Muslims as ignorant, violent or incestuous.

“Poorer, dumber, breeding like rats. They’ve got it all,” one post says about Muslims in India, which is still online. “India needs to eliminate them before they rise up,” read another, which has since been deleted. (R/Chodi’s increased popularity has coincided with a steep rise in religious hate crimes in India.)

As r/Chodi has faced criticism from communities like r/AgainstHateSpeech, the group’s own moderators have made efforts to halt the most overt examples of hate speech, including creating a list of banned words. But r/Chodi posters have simply turned to code words and increasingly slippery rhetoric, to get around the moderators and Reddit’s AI-driven natural language processing techniques, according to r/India moderators. Muslims are referred to using coded language such as “Abduls,” “

When Reddit moderator asantos3 clicked on a thread inside the group r/Portugueses in December and found it full of racist comments, he wasn’t exactly surprised. The group is often home to nationalist and nativist rhetoric, and in this instance, users here were responding angrily to a new law that allowed increased freedom of movement between Portuguese-speaking countries including African nations like Mozambique and Angola. “Wonderful, more stupid Blacks to rob me in the street,” read one comment in Portuguese, which received 19 likes. “This Africanization of Portugal can only lead the country to a third-world backwardness,” read another.
[time-brightcove not-tgx=”true”]

So, asantos3, who moderates the much larger and more mainstream group r/Portugal, quickly sent a report to Reddit staffers with a link to the thread. Within minutes, he received an automated response: “After investigating, we’ve found that the reported content doesn’t violate Reddit’s Content Policy.”

The response was disappointing but predictable for asantos3, who has served as a volunteer content moderator for six years. As part of his duties, he deletes comments that contain racism, homophobia, sexism and other policy violations, and sends reports to Reddit about hate speech coming from smaller satellite groups like r/Portugeses. Asantos3 spoke on the condition that he would be identified only by his Reddit handle. He says his duties have led to him being doxxed—with personal details including his Instagram and LinkedIn profiles posted online— and threatened. And asantos3 says that the company itself has repeatedly ignored reports of harassment from him and other moderators. “We mostly stopped reporting stuff, because we don’t have feedback,” he says. “We have no idea if they read our reports, or if there are even Portuguese-speaking people in the company.”

Reddit’s problem is a global one, say current and former moderators. Indian subreddits like r/chodi and r/DesiMeta include Islamophobic posts and calls for the genocide of Muslims. In subreddits about China like r/sino and r/genzedong, users attack Uyghurs and promote violence against them. And members of r/Portugueses regularly traffic in anti-Black, anti-Roma and anti-immigrant sentiment.

READ MORE: The Subreddit /r/Collapse Has Become the Doomscrolling Capital of the Internet. Can Its Users Break Free?

“Anything outside the anglosphere is pretty much ignored, to be honest,” 11th Dimension, a former moderator of r/Portugal who stepped down from his role due to burnout, says. “It’s hard to convey to the company what’s racist and what’s …read more

People Want Business Leaders to ‘Break the Cycle of Distrust’ and Address Societal Issues, According to New Report