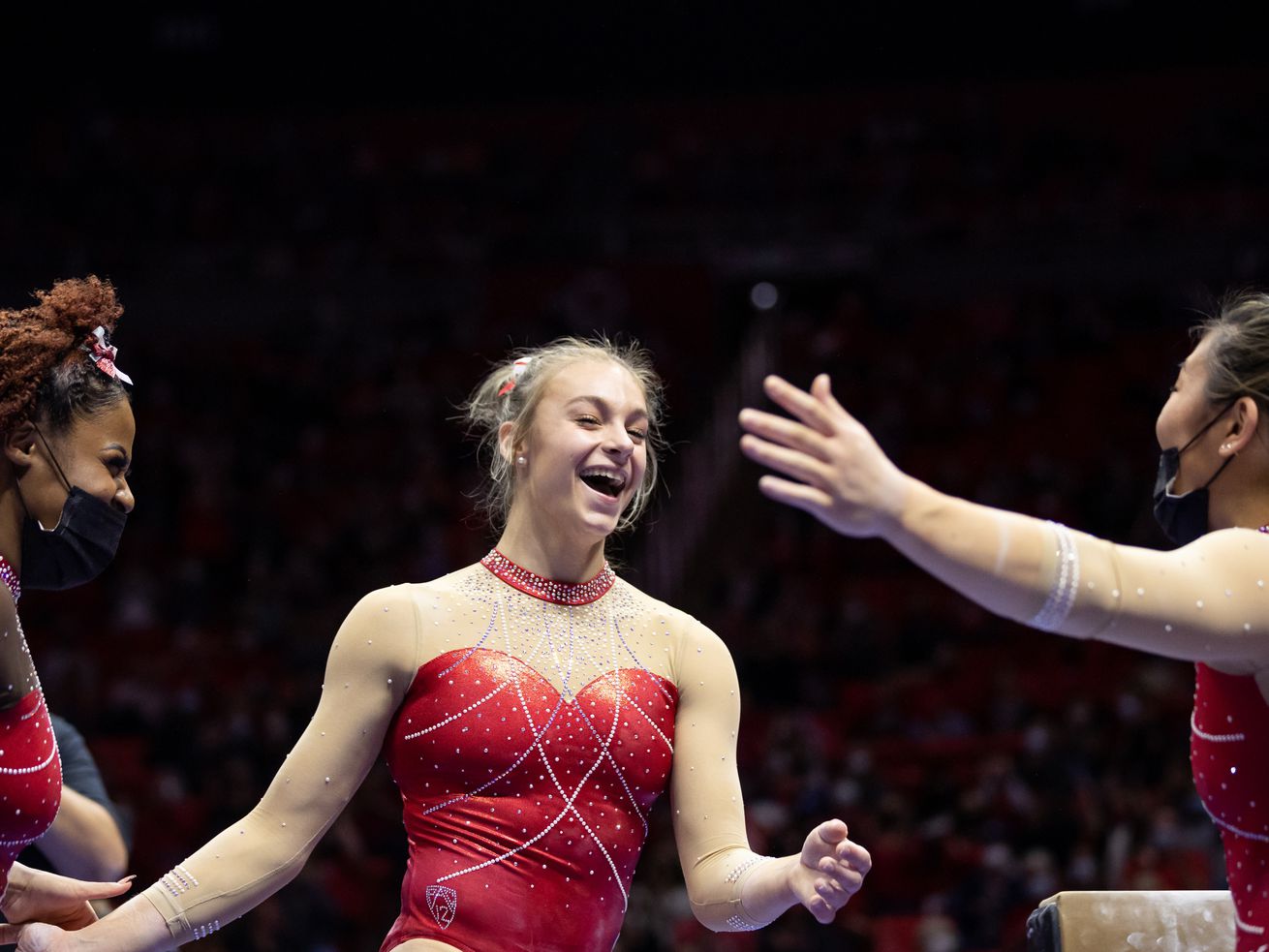 Utah’s Grace McCallum is congratulated by teammates during the gymnastics meet with Oklahoma at the Huntsman Center in Salt Lake City on Friday, Jan. 14, 2022. | Spenser Heaps, Deseret News

The No. 4-ranked Red Rocks defeated the No. 3-ranked Sooners, handing Oklahoma its first regular season loss since 2018.

Utah gymnastics is coming for Michigan. And Florida. And LSU. And whomever else around the country that hopes to compete for and win a national championship this season.

The No. 4-ranked Red Rocks showed themselves to be legitimate national title contenders Friday night in the Huntsman Center (if there was any doubt), with a 197.775 to 196.650 victory over No. 3 Oklahoma.

Pitted against the most dominant gymnastics program of the last half decade (Oklahoma has been that good), a team that defeated Utah multiple times just last year, the Red Rocks had a historic performance.

The 197.775 was the best team score Utah has ever recorded in January. It was the best score the Red Rocks have ever had in a home opener. Grace McCallum had a breakout performance, recording the best all-around score by any gymnast this season (admittedly, the season is still young).

Utah’s beam lineup, one of the best in the country a year ago, looked more than capable of being the best there is when it is all said and done, and Utah’s floor lineup wasn’t far behind.

Ten different Red Rocks earned a score of 9.90 or better, scattered across the four events, and McCallum and fellow freshmen Sage Thompson — the pair are roommates — earned event victories on floor and bars, respectively.

It was simply a statement victory for Utah.

“We were ranked No. 4 in the preseason, so obviously people thought we were pretty good at gymnastics, but this was us showing them that we are not going to stay No. 4,” senior Sydney Soloski said. “That is not what we are after. We have talent and are a very determined and confident team. Tonight showed that we are a force to be reckoned with and we are only going to get better.”

(Visited 1 times, 1 visits today)
With win over Oklahoma, Utah showed it is ‘a force to be reckoned with’
0
SHARES
ShareTweet