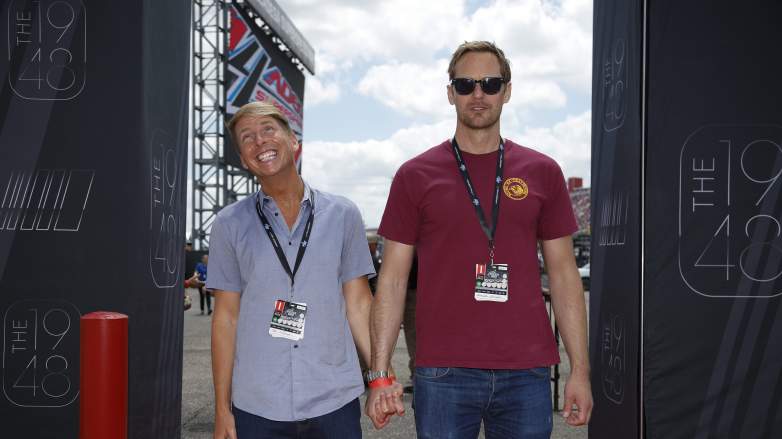 The NASCAR Cup Series returned to Talladega Superspeedway on Sunday, April 24, for the Geico 500. The race, which Ross Chastain won, served as the site of a major crossover between stock car racing and two popular feature films.

Prior to the race, “The Northman” star Alexander Skarsgard provided the command for the drivers to start their engines while serving as the grand marshal. He then watched part of the race from Ryan Blaney’s pit box. Joining him was popular comedic actor Jack McBrayer, who notably played Glenn in “Talladega Nights: The Ballad of Ricky Bobby.”

HE BROUGHT THE ENERGY! 🙌@TheNorthmanFilm’s Alexander Skarsgård gets us going at @TALLADEGA! pic.twitter.com/cIP9Rs0Wm8

The Geico 500 was the first NASCAR race that Skarsgard attended. He had some experience at previous races in other series, but he had never witnessed the top level of stock car racing. This changed as he headed to the biggest track on the schedule and hunted for a new favorite driver.

The trip to Talladega didn’t simply feature a command by “The Northman” actor. Instead, both he and McBrayer took part in several special experiences. They appeared on “NASCAR Trackside Live,” toured the media center, spent time on the grid with Michael Waltrip, and posed for photos with fans.

Of course, the opportunity to sit on Blaney’s pit box and take in the race was a unique opportunity. They spent time around the crew and witnessed as crew chief Jonathan Hassler made decisions. The two actors were also able to listen in on the scanners while looking down at active pit stops.

Skarsgard didn’t reveal who he had selected as his new favorite driver. NASCAR’s Alex Weaver recommended during an interview that the actor select someone who has achieved success at Talladega Superspeedway, so it was fitting that he and McBrayer spent time with Blaney. After all, the Cup Series veteran has two wins at the superspeedway.

GettyKurt Busch drives the Wonder Bread Chevrolet at Talladega in 2013.