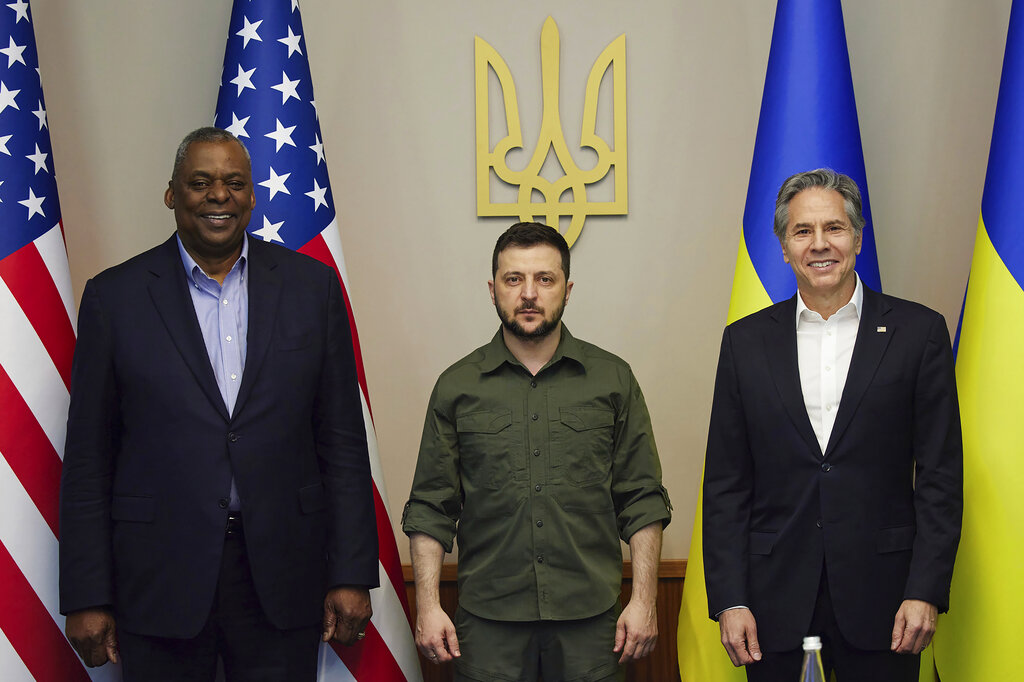 KYIV, Ukraine (AP) — Russia unleashed a string of attacks against Ukrainian rail and fuel facilities Monday, striking crucial infrastructure far from the front line of its eastern offensive, which Britain said has yet to achieve a significant breakthrough.

Meanwhile, two fires were reported at oil facilities in western Russia. It was not clear what caused the blazes.

As both sides in the 2-month-old war brace for what could be a grinding battle of attrition in the country’s eastern industrial heartland, top American officials pledged more help to ensure Ukraine prevails.

In meetings with President Volodymyr Zelenskyy in Kyiv on Sunday, the American secretaries of state and defense said Washington had approved a $165 million sale of ammunition for Ukraine’s war effort, along with more than $300 million in foreign military financing.

“The strategy that we’ve put in place — massive support for Ukraine, massive pressure against Russia, solidarity with more than 30 countries engaged in these efforts — is having real results,” Blinken told reporters in Poland the day after the meeting.

“When it comes to Russia’s war aims, Russia is failing. Ukraine is succeeding,” he added.

Speaking Monday to top officials at the Prosecutor General’s office, Russian President Vladimir Putin said that the U.S. and its allies have tried and failed to “split Russian society and to destroy Russia from within.”

When Russia invaded on Feb, 24, its apparent goal was a lightning offensive that would quickly take the capital and perhaps even topple the government in Kyiv. But the Ukrainians, aided by Western weapons, bogged Putin’s troops down and thwarted their push to Kyiv.

Moscow now says its focus in the eastern region of the Donbas, but one senior military official says it also wants to control southern Ukraine. While both sides said the campaign in the east has begun, it has yet to gather steam.

A small group of Ukrainian troops holed up in a steel plant in the strategic city of Mariupol are tying down Russian forces, and keeping them from being added to the offensive elsewhere in the Donbas, Britain’s Ministry of Defense said Monday.

Over the weekend, Russian forces launched fresh airstrikes on the steel plant in an attempt to dislodge the estimated 2,000 fighters inside. An estimated 1,000 civilians are also sheltering in the steelworks, and the Russian military pledged to open a humanitarian corridor Monday for them to leave.

Mariupol has endured fierce fighting since the start of …read more

How to Vote For ‘American Idol’ 2022 Top 7 Contestants