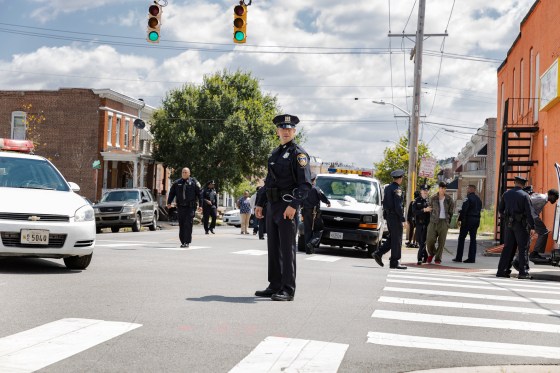 Paul Schiraldi/HBOJon Bernthal in ‘We Own This City’

We Own This City, an HBO Max miniseries out April 25, about a Baltimore Police Department (BPD) task force unit that went rogue, highlights some of the biggest concerns with modern policing in America. Adapted from former Baltimore Sun reporter Justin Fenton’s 2021 book We Own This City: A True Story of Crime, Cops, and Corruption, the show chronicles the rise and fall of one of the most shocking instances of police corruption in Baltimore’s history.

The miniseries, co-created by The Wire‘s David Simon and George Pelecanos, follows a special unit, known as the Gun Trace Task Force (GTTF), which was assembled in 2007 to remove guns and violent criminals from the streets of Baltimore. Instead of getting rid of crime, police officers in the GTTF engaged in it, against the communities they were supposed to serve. In 2015, the Drug Enforcement Administration (DEA) started investigating the unit. They specifically tracked one member, Momodu Gondo, who was believed to be working with drug dealers and possibly helping them circumvent drug charges.
[time-brightcove not-tgx=”true”]

The extent of the GTTF’s reign of terror on the city of Baltimore became more widely known in 2017, when eight members of the unit were indicted on charges of extortion, robbery, racketeering, and overtime fraud. The case was brought after the DEA heard Gondo admitting to selling drugs on tape. Once Gondo was arrested and authorities began investigating the entire unit, the GTTF’s scale of corruption became apparent.

We Own This City depicts the officers stealing drugs and money, authorities investigating their actions, and their eventual downfall and when the officers started to turn on each other. Here’s what to know about the true story behind the miniseries.

How the GTTF terrorized the city of Baltimore

The wide array of crimes the GTTF’s officers engaged in is staggering. They targeted suspected drug dealers, carried fake weapons in case they shot an unarmed person to plant the weapon on them, and would re-sell the weapons and drugs that they stole to criminals.

In one instance, revealed in court, officers took someone’s house keys, found out where that person lived and stole $100,000 from a safe in the house. In a 2016 incident, officers stopped and arrested a couple who had been leaving a Home Depot, even though there was no evidence that the couple committed a crime. When they found out that the couple had …read more

Kailyn Lowry: My New Boyfriend is the Love of My Life and We’re Probably Getting Married!

Anna Duggar Net Worth: How Broke Is Josh’s Wife?