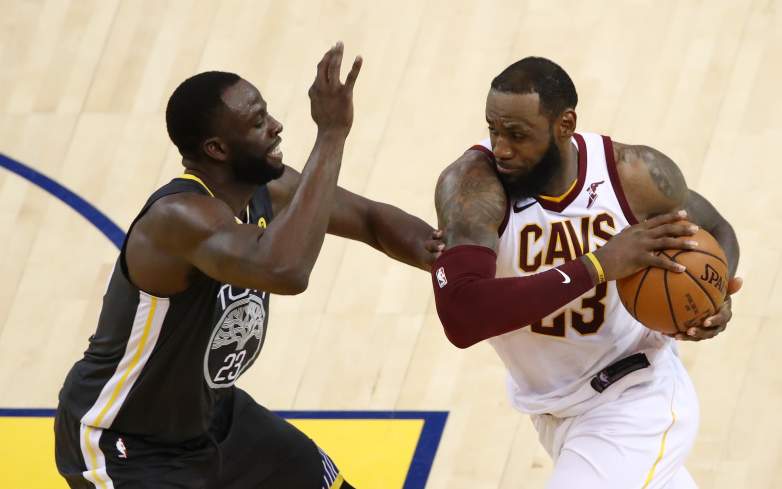 Golden State Warriors star Draymond Green wields his words off the court as fearlessly as any player in the NBA. Turns out, the same is true in-game as well.

Video and audio caught Green calling out the officials during the Warriors Game 5 victory over the Denver Nuggets Wednesday night at Chase Center. The dispute came in the latter stages of the first quarter, when Nuggets guard Bones Hyland drove to the hoop and put a knee into the groin of Golden State’s Otto Porter. The referees called Porter for a foul as he writhed on the floor in pain.

Green, ever authentic to his personal brand of brash outspokenness and team loyalty, was up off the bench immediately and in the ears of the officials, recalling his own famous suspension for a similar play during an NBA Finals game six years before.

“I got suspended from the Finals game for that.”

The referees honored Green’s request for a review, though they chose not to hit Hyland with a flagrant foul, deeming the action inadvertent and absent malice.

The Groin Shot Heard Round The World

GettyDraymond Green (left) of the Golden State Warriors defends LeBron James (right), formerly of the Cleveland Cavaliers, during Game 2 of the 2018 NBA Finals.

The personal saga Green referenced in his rebuke of the officials Wednesday night continues to live on in Warriors basketball lore, as it perhaps changed the very course of NBA history.

Golden State was up 2-1 on the Cleveland Cavaliers in the 2016 NBA Finals, coming off of the best regular season in league history (73-9) and seeking to claim back-to-back titles. During Game 4, Green got caught up with LeBron James near half court and ended up hitting the deck. James stepped over …read more

Bulls ‘Success or Failure’ Will Be Determined by 1 Key Offseason Move: Analyst

Star Player Indicates He Wants to Return to the Rams

How to do a voiceover on TikTok to narrate your video