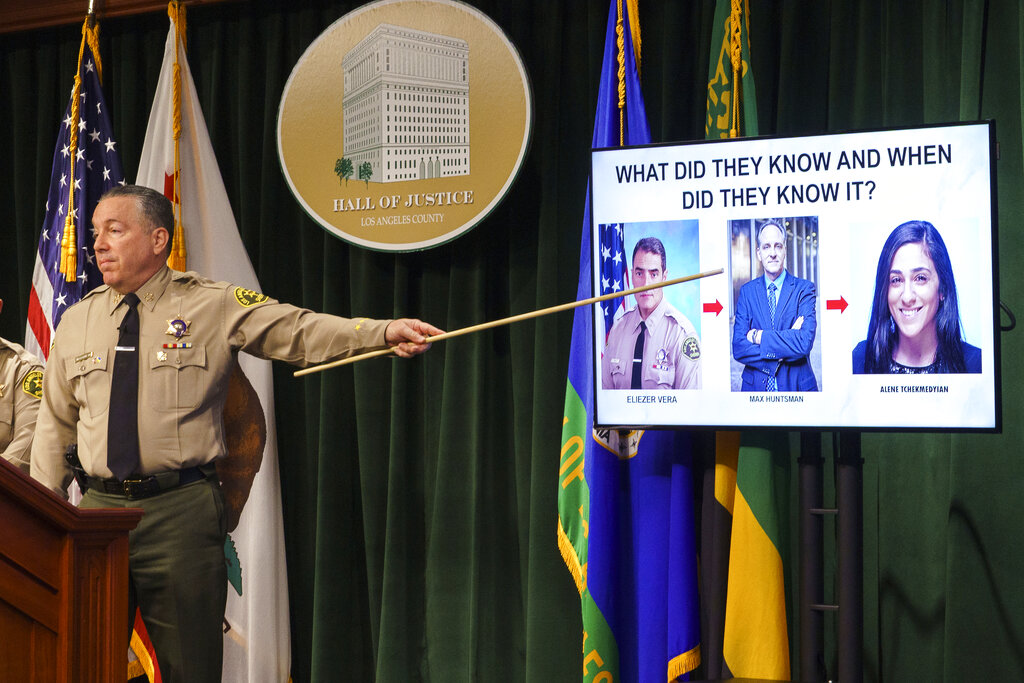 LOS ANGELES (AP) — One of Los Angeles County Sheriff Alex Villanueva’s closest advisers says she was told to choose between retirement or demotion after raising questions about his handling of the investigation into a deputy kneeling on a handcuffed inmate’s head for several minutes.

The March 10, 2021, incident was captured on video. Robin Limon, who was an assistant sheriff, said she watched it five days later with Villanueva and two other sheriff’s officials, according to a legal claim — a precursor to a lawsuit — filed Thursday by Limon’s attorney.

Limon said she expected Villanueva would act quickly after seeing the video, but internal and criminal investigations of the deputy were delayed.

She said she grew frustrated with Villanueva’s handling of the case and overall oversight of the agency of the nation’s largest sheriff’s department, which has about 10,000 deputies. Things came to a head last month when Villanueva demanded she choose “between two poisonous options:” retirement or a four-step demotion to the rank of lieutenant, the claim said. She instead took a leave.

“The reasons for the Sheriff’s misconduct were twofold, to retaliate against the Complainant for being a whistleblower on several instances of illegal and other wrongful conduct and to further his cover up of an excessive use of force incident,” the claim said, referring to the deputy kneeling on the inmate.

Villanueva — who is running for a second term — has denied any wrongdoing in his handling of the case. He maintains he did not see the video until eight months after the incident.

A statement issued Thursday by the department said there would be no comment on Limon’s claim. “We look forward to presenting the facts in court,” the statement said.

Limon’s claim is the second filed against the sheriff over the incident, which occurred in a county courthouse.

Both accuse him of orchestrating a cover-up to limit any political damage from the video, which came into the public domain last month when the Los Angeles Times reported on the incident and posted the video, which it obtained from an unidentified source.

On Tuesday, Villanueva held a news conference and said a criminal investigation was underway to determine how the video was leaked. He said the Times reporter who broke the news was a subject of the probe.

That assertion brought quick condemnation from the paper, First Amendment advocates and local politicians. Within hours Villanueva walked back his remarks and said …read more