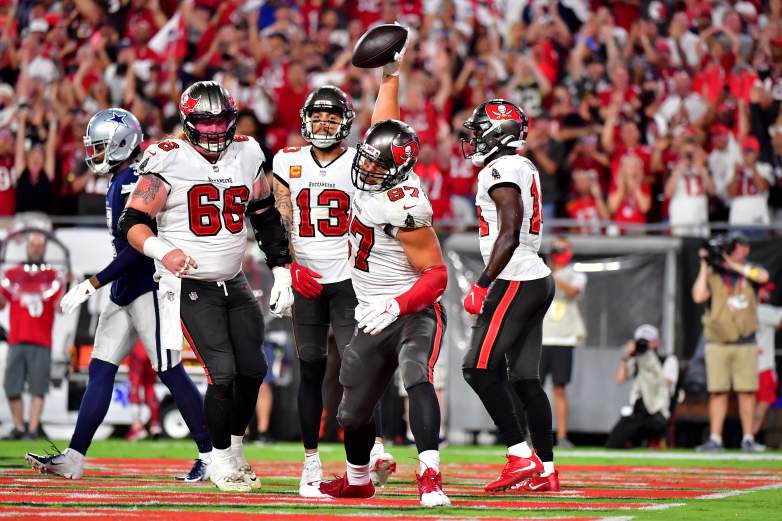 After Brady unretired on March 13, Gronkowski teased “there’s a very good chance” he would follow suit when visiting a Tampa area barbershop on March 16. Gronkowski has acted more noncommittal since, including mention of no contract talks with the Bucs yet in an interview with SB Nation.

“We’re actually way farther away from the commitment than I was before to going back to football,” Gronkowski told TMZ Sports.

Gronkowski at least hasn’t quit working out. A photo of him and Tennessee Titans star running back Derrick Henry working out together circulated social media recently.

GettyRob Gronkowski hasn’t decided if he will do more ‘Gronk Spikes’ this year.

“I’m staying in shape a little bit, so we’ll see if I don’t get too out of shape either. That won’t be good for me,” Gronkowski told TMZ Sports.

Despite missing five games due to injury in 2021, Gronkowski continued a high level of play with 55 catches for 802 yards and six touchdowns.

The latest Bucs news straight to your inbox! Join the Heavy on Bucs newsletter here!

Gronkowski said at the barbershop that he will let Brady “have a little scare” since “he just did it to me for a couple months” during his 41-day retirement. If that’s all Gronkowski is doing, he’s taken everyone else along for the ride.

In the TMZ Sports interview, Gronkowski elaborated on his off-field endeavors, particularly his draft party in Las Vegas, as he clearly shifted to a humorous tone about his future. He even teased that his party might inspire a comeback “because somebody is going to throw me a football on stage” during the party.

“You think I’ve thought about football one single time this week? Heck no,” Gronkowski told TMZ Sports. “No chance.”

“Actually, I will be practicing because there will probably be a football up on stage on something,” Gronkowski added. “That’s when I’ll start getting my first practices in.”

How a Few Tiny Islands Are Helping China Project Power