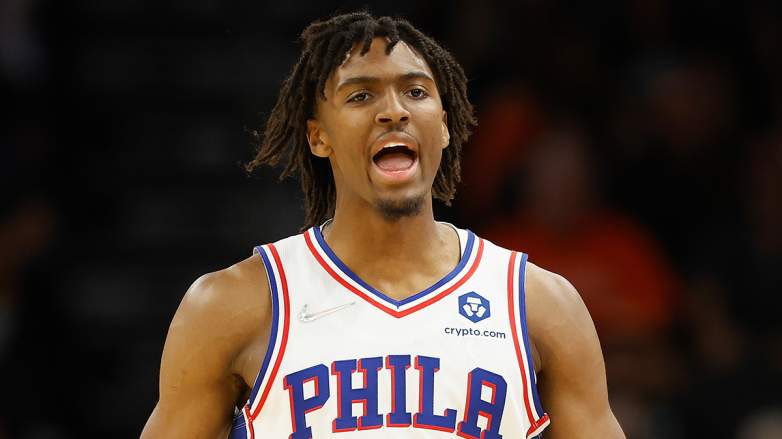 It might’ve gotten scary near the end, but the Philadelphia 76ers moved on past the Toronto Raptors after taking a command 3-0 lead.

After the Raptors won the next two games with a Game 6 in Toronto, some members of the media and even fans started to think a Game 7 was inevitable.

Thanks to Joel Embiid, James Harden and Tyrese Maxey, the Sixers were able to avoid a game back at Wells Fargo in Philadelphia. Some fans in particular were very impressed with Maxey in a closeout and would do anything to keep him in a Sixers jersey for the foreseeable future.

While he’s not due for a new contract for a while yet, there are some out there who believe that whatever money goes to Harden should instead go to Maxey. While that’s obviously not going to happen, it shows how much Maxey has won over the fans in Philadelphia.

tyrese maxey should get whatever contract they’re gonna give harden

Sports Illustrated’s Michael Pina argued that Maxey should get the max extension over Harden, and it’s hard to find Philly fans out there who don’t agree with that type of thinking.

Even before Harden came to town, Maxey emerged as a fan favorite in town and even acted as the team’s number two option behind Embiid for a good chunk of the season.

At just 21 years old, the expectation is that he’ll only get better over time and he’ll play a very important role for the team heading forward. Fans are tough to win over in Philly, so it’s impressive Maxey has done it so soon.

Sixers advance to the 2nd round 🔥 pic.twitter.com/3IpwBMyOvO

When looking to move Ben Simmons, Maxey was a player that was deemed to be untouchable, and that’s looking like a very good decision right now.

The next round will be against the Miami Heat and the team will certainly have their work cut out for them there. While Harden looked like a vintage version of himself in the closeout game against the Raptors, they’re going to need more performances like that …read more

1 million Covid deaths; Is America still in the Pandemic? |Opinion

‘One of a kind’: Pilot killed in plane crash identified as Calgary business owner