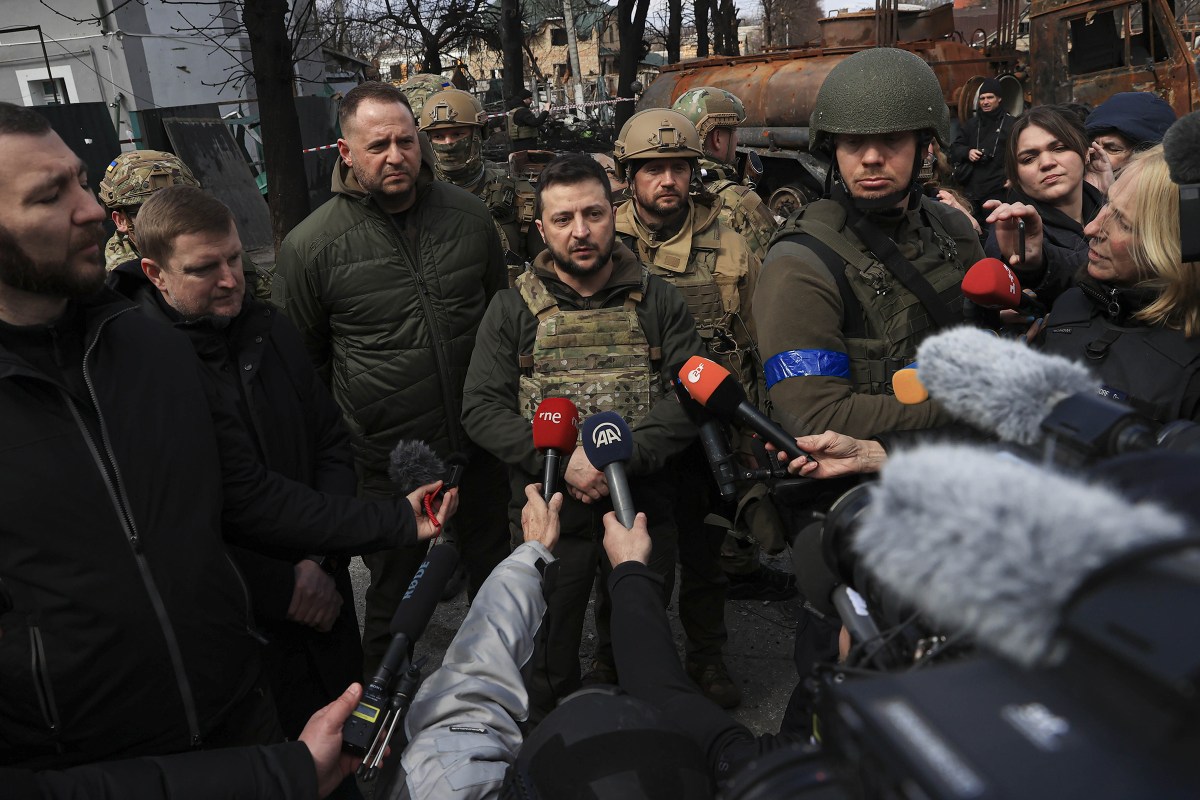 Metin Aktas—Anadolu Agency/Getty ImagesZelensky, with his chief of staff Andriy Yermak, center, speaks to journalists in Bucha on April 4

The aggression against Ukraine is a natural consequence of the continuous series of conflicts in which Russia took part after the collapse of the USSR. This is the decisive phase of the Third Thirty Years’ War. No one can predict how long it will last.

There is one thing we can be sure: Moscow has consciously chosen the path of international relations archaization. It has chosen to consistently deny the primacy of international over national law, systematic violations of agreements, and withdrawal from any rules contradicting its aggressive ambitions. It is has chose to disrupt the international bodies—these are all signs of the drive to replace the rule of law with the right of force. We should clearly understand that the Russian regime is not the only one in this endeavor.

Russia is at the forefront of the forces intent on rolling back the international relations system. How far will they go? That is the key issue.

Prior 2014, an opinion was popular among some experts that Russia was counting on a second “Yalta” – in the sense of the world redistribution by blocs. However, Russia is currently unable to create influential international bodies, and all such efforts under Moscow’s auspices are purely instrumental. However, the Kremlin is also reluctant to become a junior partner in international bodies.

The current international security system has nearly expired. It’s rotted through. Its remains have collapsed and buried the world order beneath. Trying to revive it is futile.

Most of all it resembles a broken automaton: its limbs are still able to move, but its gears are worn out, its springs are stretched. And the synchronicity that used to give perfection to its movements, has long gone.

Clockwork toys, robots’ mechanical ancestors, became fashionable with the European royal courts during the Thirty Years’ War in the 17th century. But the first world conflict in European history, a series of interconnected wars, resulted in something even more important: creation of the first world order ever.
[time-brightcove not-tgx=”true”]

Since then, the system of international relations has been based on the Peace of Westphalia 1648 and its core principles: national sovereignty, foreign and domestic policies separation, compromise as a means of reconciling conflicting national interests, equality of sovereign states, and negotiating relations between them.

All the subsequent systems were in fact more or less successful attempts to amend this order to ensure the balance of interests of leading states (known as the Great Powers).

This tendency was clearly traced from the Congress of Vienna in 1815 to the Potsdam Conference in 1945. Between the dates, attempts to reject any of the principles of the Peace of Westphalia would inevitably lead to new conflicts. The Great Powers’ aspirations to impose their own will on the rest of the world by force brought the nightmare of two world wars. Or, as some historians rightly point out, the Second Thirty Years’ War of 1914-1945.

Now history repeats itself. Russia’s war on Ukraine is a rejection of all Westphalian principles. We are denied the right to sovereignty. We are under pressure to change our domestic policy. Under the guise of compromise, we are offered surrender. We are denied subjectivity and therefore equality. Our civilians are being tortured and killed en masse for simply being Ukrainian citizens.

It is a crusade against Ukraine in the literal historical sense—it’s a sheer aggression, accompanied by sadism, raping, marauding, looting and systematic malicious destruction, under the guise of serving a greater purpose. The purpose that Russian propaganda, statesmen, and religious leaders define as a fundamentally false narrative of “protecting the spiritual ‘Third Rome’ from the spiritless and treacherous West breaches.” And the Patriarch of Moscow blesses with his own hand Russian soldiers to conquer Ukraine.

The Global System Has Failed. Ukraine Is Showing the World How to Build A Better One

Joe Biden Is Redeploying U.S. Troops to Somalia as a New President Takes Office. Here’s What to Know