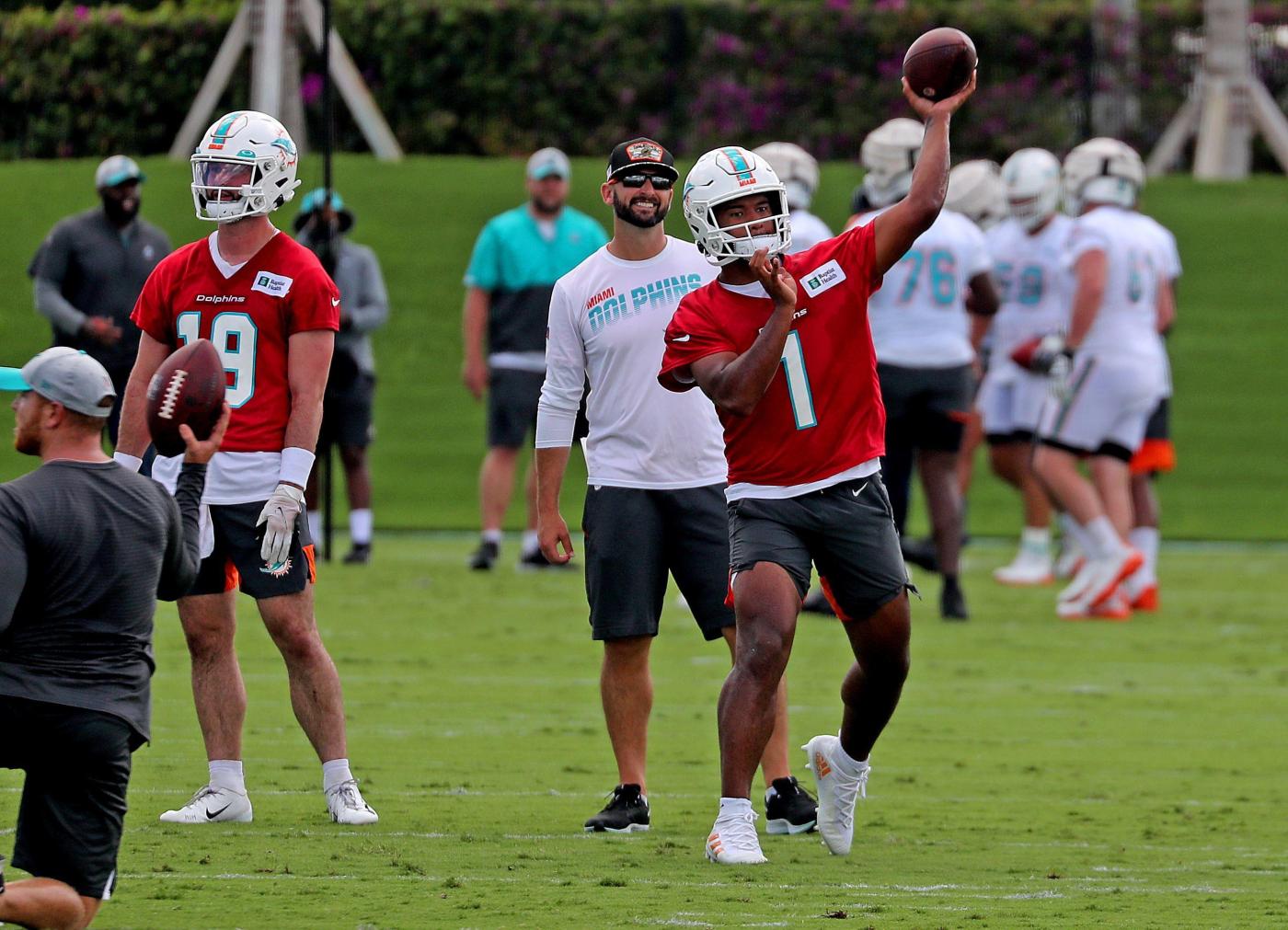 Plenty has been made of Tua Tagovailoa’s arm strength, and whether or not the Miami Dolphins’ starting quarterback has the ability to stretch the field with longer throws.

Even though Tagovailoa connected on a half dozen or so deep passes last season, his critics continue to question if his supposed arm limitations will limit Tyreek Hill’s effectiveness.

Tagovailoa and Hill did their best to silence those concerns by connecting on two long passes during the 11-on-11 periods of Thursday’s mandatory minicamp practice.

On the first deep ball, which Hill scored on and subsequently punted the ball to celebrate, the six-time Pro Bowl receiver slipped Noah Igbinoghene’s coverage and got behind the Dolphins safeties and Tagovailoa hit him in stride.

On the second deep ball, which came during the late 11-on-11 session, Hill got behind the entire Dolphins defense by about 7 yards and had to wait for the beautiful pass from Tagovailoa, which traveled 51 yards in the air.

While it’s possible that Hill could have scored on the throw, the Dolphins ruled that he was stopped inside the 5-yard line.

“I don’t know about you, but that looked like money,” Tagovailoa said after practice, praising the second deep ball throw.

While Tagovailoa and Hill impressed, the entire offense wasn’t able to take a victory lap because Miami’s defense continued to dominate the day.

If tackling were allowed, Wilkins would have finished the day with two sacks and three or four tackles for loss on run plays. There was one play where Wilkins was in Miami’s backfield so fast Salvon Ahmed barely received the hand-off before getting chest bumped by Wilkins.

Wilkins flexed at the end of that play, just like he’s been flexing all OTAs, serving as the most dominant defender in the four practices the media has watched.

Another top performer Thursday was inside linebacker Duke Riley, who was clogging up the offense’s running lanes during his package-based work, which seemed to be highlighted on Thursday.

During the first 11-on-11 period, Riley made three tackles during his share of the snaps.

Cornerback Nik Needham broke up a Tagovailoa pass to Jaylen Waddle on third down. The Dolphins’ blitz was coming from the opposite side and Needham was on an island with little help.

The best defensive play of the day came when …read more

Sheriff must pay $247,000 to woman terrorized by escaped inmate