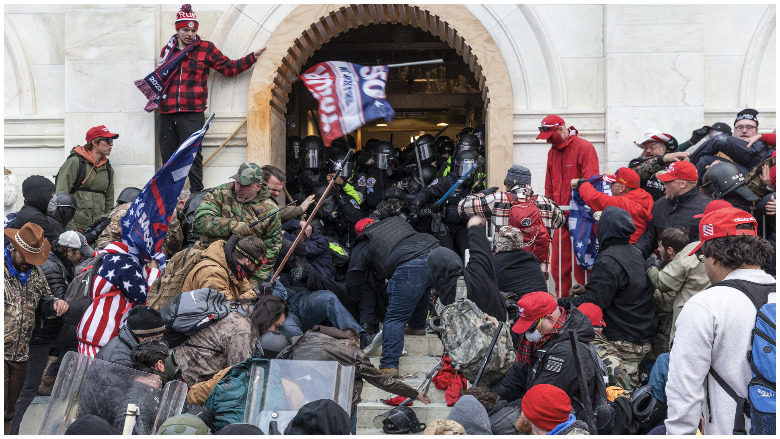 The January 6 investigation is about to play out in primetime. The House Select Committee, which includes seven Democrats and two Republicans, has been examining the attack on the U.S. Capitol for nearly a year. The committee plans to present its findings and interview witnesses in its first televised hearing on June 9 beginning at 8 p.m.

Here’s what you need to know.

The Hearing Is Streaming Live & Most TV Networks Are Broadcasting It

If you’re interested in watching the proceedings, there are many options. The January 6 Committee is streaming the hearing live on YouTube. A live stream is also available from C-SPAN.

Most of the major news networks plan to broadcast the hearing live, meaning regular Thursday night programming will be preempted. ABC, CBS, NBC, CNN, and MSNBC all plan to air the hearing live, USA Today reported.

Fox News is sticking with its usual primetime schedule, but according to a network press release, the “primetime programs will cover the hearings as news warrants.” The hearing will be covered live on Fox Business, and streamed on Fox News Digital for free, with anchors Bret Baier and Martha MacCallum leading the coverage. The network says Baier, MacCallum and correspondent Shannon Bream will then anchor a “reaction special” on Fox News starting at 11 p.m. ET.

The Committee Will Interview a U.S. Capitol Police Officer & a Filmmaker Who Had Been Documenting The Proud Boys

GettyA picture shows the scene when a Capitol police officer was attacked and beaten.

The Committee says it will interview at least two witnesses during the televised hearing on June 9. The panel will hear from U.S. Capitol Police Officer Caroline Edwards. According to the congressional website, she was “the first law enforcement officer injured by rioters storming the Capitol grounds” and continued to defend the Capitol “even after suffering a traumatic brain injury.”

Viewers will also hear from British filmmaker Nick Quested. The committee says he “documented the movements around the Capitol that morning, the first moments of violence against U.S. Capitol Police, and the chaos that ensued.”

According to the New York Times, Quested is also expected to testify about any planning that took place before January 6. The outlet reports Quested had been documenting The Proud Boys, with the organization’s permission, in …read more

January 6 Committee Hearings: What to Expect & How to Watch Live on June 9

Fremont: Shooting between vehicles leaves one dead behind the wheel