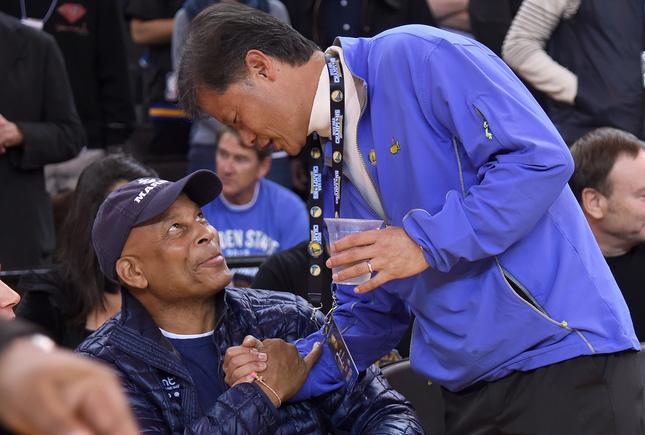 As the Warriors vie for their fourth NBA championship in eight seasons, some 49ers legends can relate, and they’re doing so in awe.

“I have mad respect for all of them, because they don’t shortcut,” Ronnie Lott said in a phone interview Tuesday. “They leave it all on the court. We’ve all seen how they’ve done that.”

The Warriors resume their title hunt tonight, when they visit the Boston Celtics for Game 3 of an NBA Finals that’s tied at 1-1.

Lott and Turner are among five 49ers to play on the franchise’s first four Super Bowl-winning teams, from 1981 to ’89. Joe Montana, Mike Wilson and Eric Wright are the others. When the 49ers won the Lombardi Trophy a fifth time in 1995, that put offensive lineman Jesse Sapolu in the four-ring fraternity, too.

“There are so many reasons why four is better than three,” Lott said. “What does that mean? It might mean you’ll be in the Celtics’ club.”

By that, Lott referred to admiring the Bill Russell-led Celtics’ dynasty that won 11 championships from 1957-69.

“Some kid is sitting there right now going, ‘Wow, (the Warriors) are in that club,’ ” Lott said. “To do it the way it looks like they’re going to have to do it, to me, it’s going to be pretty special.”

Lott has had a long-time, courtside seat amid this Warriors’ dynasty so he’s keen on what will decide this championship

“The way that other team (Boston) is playing defense, it made me realize it’s going to be one of those series. You have to earn it,” Lott said. “Whoever earns it is going to have to really earn it. Nobody is laying down.”

When it comes to the 1980s 49ers and this era’s Warriors, there’s no need to debate which championship core is better — or will be more revered into eternity. The 49ers’ respect for these Warriors is cool and obvious.

“As big as any one of those guys are, they acquiesce to the group,” Turner said. “I’m in awe of them.”

Turner wants them to join the four-ring fraternity, to know what it’s like to be forever adored in this region, to rally together a community for a seemingly growing sport.Related …read more

NBA says no need for a Strus rule after playoff time-shifting; also, a non-cosmetic nose job for Heat’s Robinson