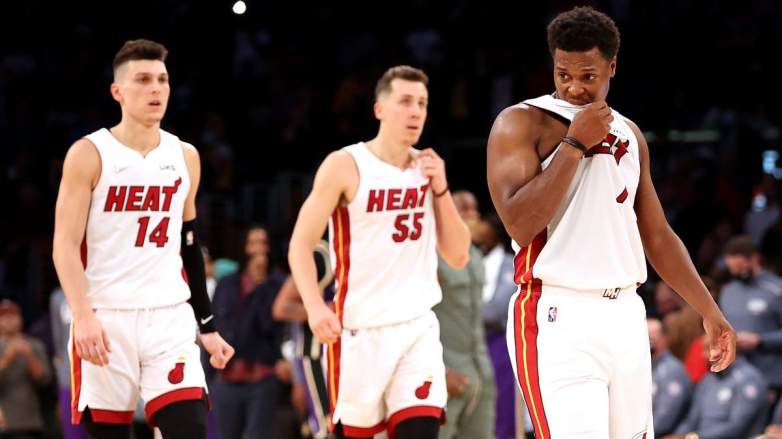 It’s no secret that Kyrie Irving’s time with the Brooklyn Nets has been very up and down.

When he’s on the floor he proves he’s still one of the best players in all of the NBA, but there’s never a guarantee he’ll be on the floor for a long time. Whether it’s injuries or ineligibility, Irving has missed a lot of games during his time in Brooklyn.

Perhaps as a way to capitalize on Kevin Durant’s shrinking championship window, the Nets could opt for a blockbuster deal that retools the roster on the fly. The Ringer’s Bill Simmons suggests just that and his hypothetical trade would have Irving being shipped to the Miami Heat in exchange for former NBA champion Kyle Lowry.

It might sound strange on paper, but Simmons does have an explanation.

The Nets trading away Irving would be a tough pill to swallow considering they brought him in to play with Kevin Durant.

It can be argued that Irving wouldn’t miss games for non-basketball related issues if he played in Miami, and that’s what Simmons is hinting at while proposing a Kyle Lowry swap.

“How about Lowry and Duncan Robinson for Kyrie and Joe Harris,” he said on The Bill Simmons Podcast. “Kyrie in Heat culture? The sky is the limit.”

Throughout Pat Riley’s tenure with the Heat, there has been a shift in culture and players have been expected to play with a certain toughness and within a set of rules. While it might get mocked by fans, players do say it’s a real thing.

As for whether or not the Heat are willing to take on the challenge of coaching Irving, Simmons, perhaps in jest, says coach Eric Spoelstra would be on board.

Does It Make Sense?

GettyKyle Lowry of the Miami Heat.

For the Heat, this trade could be worth rolling the dice on because Irving certainly seems like an upgrade over Lowry, especially at this stage in their careers. Both are former NBA champs, so both of them know what it takes to win a championship.

Duncan Robinson was out of the rotation for the Heat in the playoffs, and that’s a bitter pill to swallow for a player on a $90 …read more

San Jose community briefs for the week of June 24

Trump aides didn’t know someone was filming Trump on January 6 until the House committee got the footage: reports