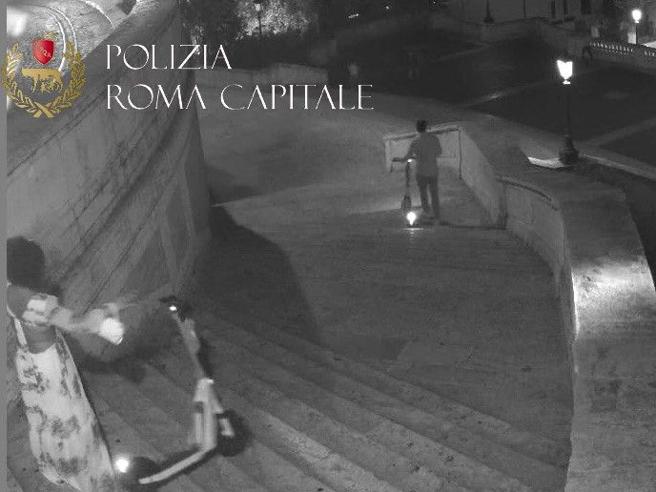 You can watch the video later in this article. It has gone viral. The Italian-language site La Republicca was one of the Italian sites that ran the video and reported that the famed tourist attraction was damaged by the woman’s actions.

According to Daily Beast, the man and woman, who have not been named, are a 28-year-old American woman and her “29-year-old companion.”

Authorities have now banned the two from ever visiting the Spanish Steps again, reported Daily Beast. According to the site, the woman appeared to be trying to keep up with the man, who had already made it to the bottom of the steps.

The Guardian reported that the woman was fined. According to The Independent, the fine was for $26,000.

Corriere Della Sera, an Italian-language site, reported that the “American tourists” were fined by “traffic police.”

The site reported that the pair was “blocked last Thursday night by a patrol of agents of the Trevi Group as they descended on the electric board for the steps of the most famous staircase in the world.”

The incident occurred on Thursday, June 2, 2022, and was filmed by a passerby. According to Corriere Della Sera, police used surveillance footage to make their case.

The site reported that the pair was stopped by “the traffic police who were checking the monument on a night of nightlife and who ordered the couple to stop.” It alleged, “…the fact is that it is not excluded that the girl deliberately threw her scooter away, making it crash right on the steps.”

The scooters were confiscated, and the tourists were sent to their hotel, the site reported.

The Spanish Steps Were Designed in 1723

According to the Guardian, to protect the historical site, people were banned from sitting on the …read more

‘Varsity Blues’ moms, dads jet-setting again – except for one California executive who once claimed ‘cardiac’ shock