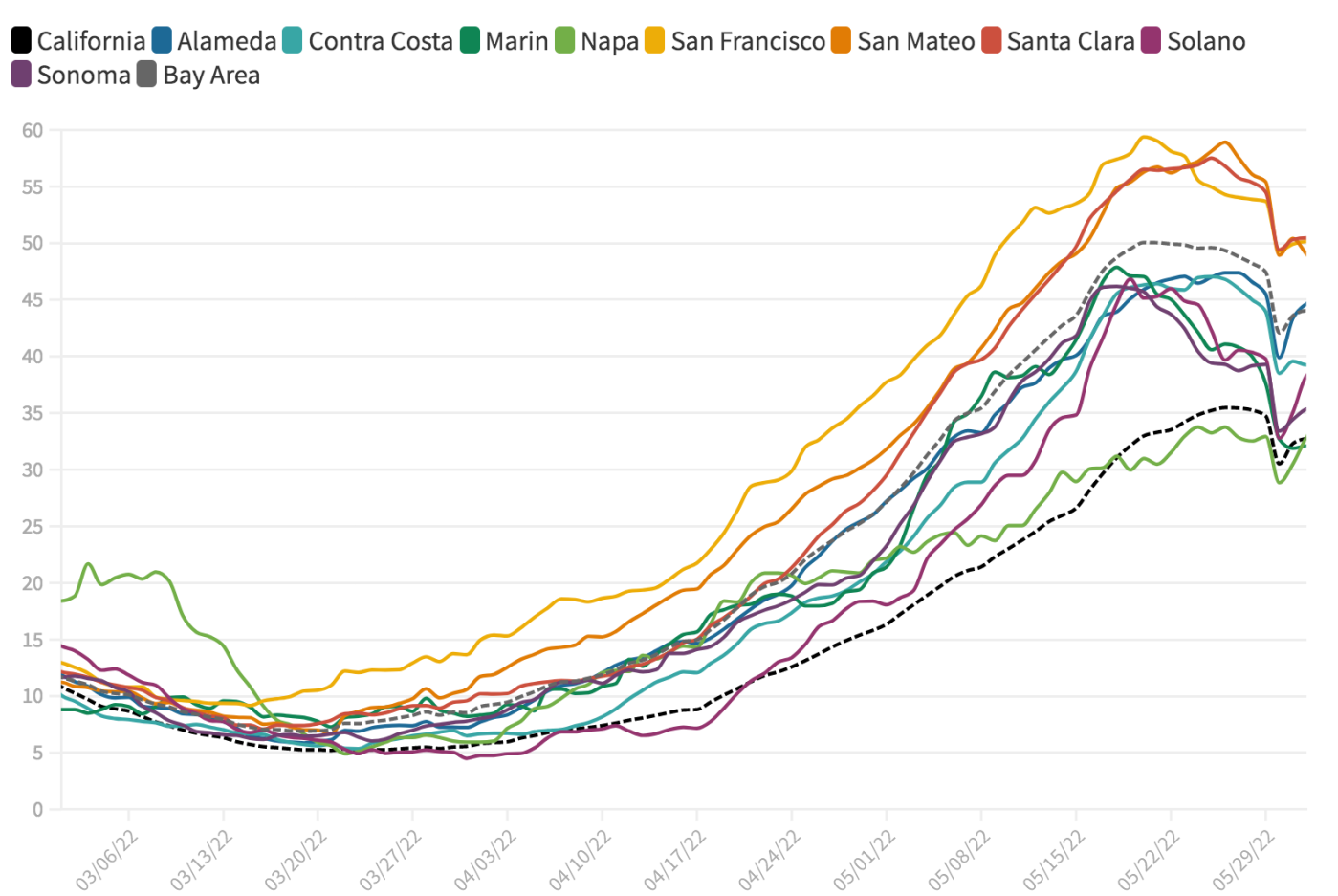 COVID case rates in the Bay Area are down from two weeks ago, suggesting the most recent COVID surge may be abating.

While reported case rates have dropped slightly, we are still experiencing “an extraordinarily high level of cases,” according to Dr. Bob Wachter, chair of UCSF’s Department of Medicine.

This spike on the COVID case chart is less than 25% of this winter’s omicron-fueled surge, but the Bay Area, which had often avoided the worst of previous surges, for the first time is recording consistently higher case rates than the rest of the state.

The seven-day average case rate for the nine-county Bay Area reached 50 on May 20, and dropped to 42 over the Memorial Day weekend, although the holiday may have caused an artificially steep drop and a correction for holiday testing dips, as the case rates raised again slightly after that.

“With prior surges we got used to a quick up plateau, and quick down” Wachter said, “but this surge has been much more slow moving and rumbling.”

The accessibility and use of rapid at-home tests means official COVID numbers are more of an undercount than during past surges. Wachter said cases could actually be four or five times higher than official accounts, which means our current peak is more comparable to this winter’s surge, when at-home tests were hard to get.

Wachter also warned that newly emerged sub-variants BA.4 and BA.5 “might complicate the trip down the mountain.”

Even with the recent undercounting of cases, California has seen more COVID cases so far this year, in just five months, than in all of 2021 or 2020.

As of the first week of June, there have been about 3.5 million COVID cases so far this year, the vast majority of those people testing positive during the beginning of the year when case rates were at record highs. The state had just over 3 million cases in 2021, and about 2.5 million in 2020.

But it is a new era in the pandemic, with vaccines readily available, and few social distancing restrictions left in place. Last week, Alameda County reinstated an indoor mask mandate, but other counties in the Bay Area have not followed suit.

The peak in cases in the Bay Area this May was five times higher than the threshold the state introduced two years ago for entering the purple tier in the now-retired color-coded shutdown system, which triggered strict limits on most public settings.

COVID: Latest wave may have peaked in the Bay Area, but still at ‘extraordinarily high’ levels

Which counties are the healthiest in America? Morgan County ranks 4th