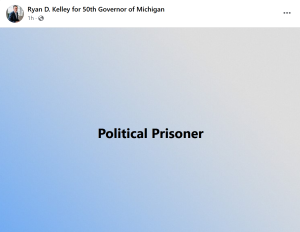 Ryan Kelley is a Republican candidate for Michigan governor who was arrested and is accused of participating in the January 6 riots at the U.S. Capitol. You can see the government’s evidence, complaint, photos and videos throughout this story.

The U.S. Department of Justice says that Kelley was arrested on June 9, 2022. A complaint was filed.

Kelley posted a graphic on his Facebook page after his arrest that reads, “political prisoner.” Kelley is a married real estate broker with five children, according to his website.

According to CNN, Kelley is one of a “crowded field” of five Republicans seeking to replace Democratic Gov. Gretchen Whitmer. The Detroit Free Press reported that, on June 9, 2022, the FBI raised Kelley’s Annandale home and arrested him.

Fellow Republican gubernatorial candidate Kevin Rinke questioned the timing of the arrest, coming on the first day of the January 6 hearings in Congress. “I respect Ryan Kelley and have met him out on the trail. My hope is that the FBI is acting appropriately, because the timing here raises serious questions. Praying for him and his family,” he tweeted.

1. An Anonymous Tipster Told Authorities Kelley was Seen at the Capitol Helping ‘Push Past Police,’ the Government Alleges

The FBI received “multiple tips” about Ryan Kelley’s “presence at the U.S. Capitol on January 6, 2021, ” the statement of facts reads.

On January 16, 2021, an anonymous tipster from Michigan” submitted an online tip to the FBI National Threat Operations Center (NTOC) via tips.fbi.gov, which identified that Ryan Kelley was at the Capitol attack on January 6, 2021,” the statement alleges.

The tipster “provided photos of who they believed was Ryan D. Kelley…at the Capitol on January 6, 2021. The information provided by the tipster showed Kelley …read more

Hail no! Coloradans expect hail storms in May, June but the threat in “hail alley” remains

Jan. 6 committee members push back on chair Bennie Thompson’s claim that they won’t ask the DOJ to indict Trump