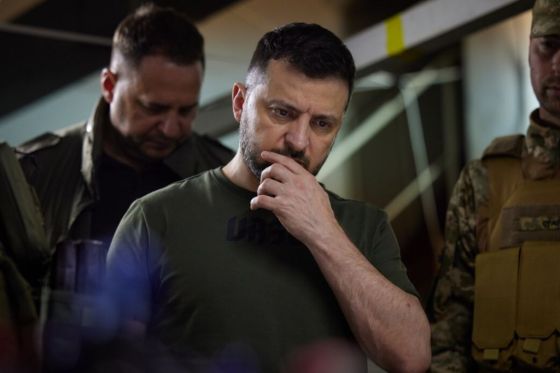 But are there any world leaders who are worried about whether or not Elon will pick up the phone when they call him, or those who worry whether he will accept them? Are there leaders who think about how long the table will be when Elon Musk sits down to talk to them? So what does the [influence] really give? What rockets? Those that serve science or those that serve death? Something has definitely slipped out of control, whether it’s our own influence, which we begin to underestimate or our attitude to leadership, [the] attitude [of] what it means to be a leader.

I have so much respect for Boris Johnson. He is a true friend of Ukraine, and a staunch defender of freedom. But unfortunately, not all depends on him whether millions of people in Africa, Asia and Latin America will have food on their tables. It is the Russian fleet—not the British one or any other—that has blocked Ukraine’s Black Sea ports so that the world is on the brink of

Editor’s note: Volodymyr Zelensky, the President of Ukraine, made a video address to the TIME100 Gala on Wednesday in New York City. The video will air on TIME100: The World’s Most Influential People Sunday, June 12 at 8 p.m. EDT on ABC.

Here are his remarks, published in full.

Ladies and gentlemen, greetings from Ukraine, and thank you for the opportunity to address you.

When I learned that I was [voted] the most influential person [in the TIME100 Reader Poll], I took it as a recognition of [what] all of our people are doing—all Ukrainians who are defending the freedom and independence of our state. And I’m honored above all to be a leader for these people.
[time-brightcove not-tgx=”true”]

Besides myself, this year’s top five features Elon Musk, Prime Minister of the United Kingdom Boris Johnson, medical workers who fought with COVID, and President of the United States Joe Biden. This ranking is made at a time when Europe is experiencing the worst war in 77 years—the war we cannot stop yet.

Why so? Why can we not stop the bloodshed? Why is our influence not working at full capacity? And why is a person who is not on our list at all holding millions of people hostage? I believe you will agree that these questions are now literally hanging in the air. But do you have the answers?

The runner-up of our top list, top of the most influential, is Elon Musk: a man who launches rockets into space and knows how to amaze the world, a man who pushes the boundaries of the possible for both intelligence and technology.

But the opinions of world leaders are not focused on Elon, not on his rockets, which ensure progress in life. Opinions of world leaders are [directed] to those who launch rockets at civilians and destroy lives. In 105 days of full-scale war, Russia has used about 2,600 different missiles against Ukrainian cities, most of them against civilian facilities, enterprises, railways, bridges, universities, even residential buildings.

One of those rockets killed three people in our city of Odesa at once: a three-month old girl named Kira, her mother, and grandmother. Three generations of one family. Kira was only a month old when Russia started a full blown war. What did she see in her life? And what did her assassination add to Russia’s influence?

Zelensky: The World’s Most Influential People Should Be Using Their Influence to Defend Freedom

Biden Administration Cheers New International Migration Agreement. Experts Say It May Not Do Much