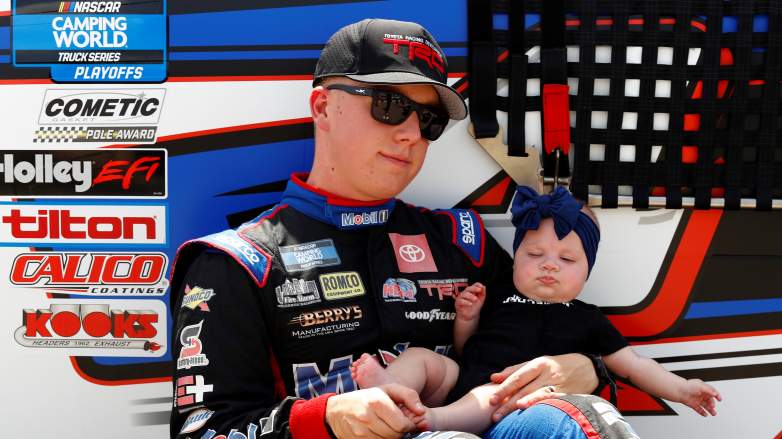 The Camping World Truck Series drivers return to action on July 23 during a packed weekend at Pocono Raceway. John Hunter Nemechek will use the race to debut a new scheme on the No. 4 entry.

The Kyle Busch Motorsports entry will arrive at the track with a purple and black Toyota Tundra TRD Pro. The entry will feature massive Yahoo! logos on the hood and the sides. Nemechek will also don a matching firesuit as he suits up for the 60-lap race around the Tricky Triangle.

Yahoo! is back 🔥@JHNemechek will be rockin’ the purple & white this weekend at Pocono. pic.twitter.com/ggsEBaixhY

Nemechek has prior success at Pocono Raceway. He has made four starts at the track, and he has three top-10 finishes and two top-fives. He won the 2021 race while driving for Kyle Busch Motorsports. Nemechek also held off Kyle Busch during the final run to the checkered flag to capture his fifth win of the year and help secure his regular-season championship trophy.

This Scheme is Part of a Massive Deal Involving Toyota

GettyJohn Hunter Nemechek prepares for a race at Darlington on September 5, 2021.

There have been multiple drivers that have displayed Yahoo! schemes during the 2022 season. Christopher Bell, in particular, has featured the purple colors during races at Martinsville Speedway, Coca-Cola 600, and Road America. He will also showcase Yahoo! during the Southern 500 at Darlington Raceway.

Busch has achieved the most success with the Yahoo! scheme. He showcased the company during the Truck Series race at Sonoma Raceway, the first at the track since the 1998 season. He led 45 of the 75 laps and won his final Truck Series start of the season.

Nemechek will try to match his boss by winning with the Yahoo! scheme. The trip to Pocono Raceway will be his first opportunity, but he will also bring the company back for Lucas …read more

Here’s Why Monarch Butterflies Are Now an Endangered Species

Kyle Richards Dragged After Saying She Apologized to Garcelle Beauvais