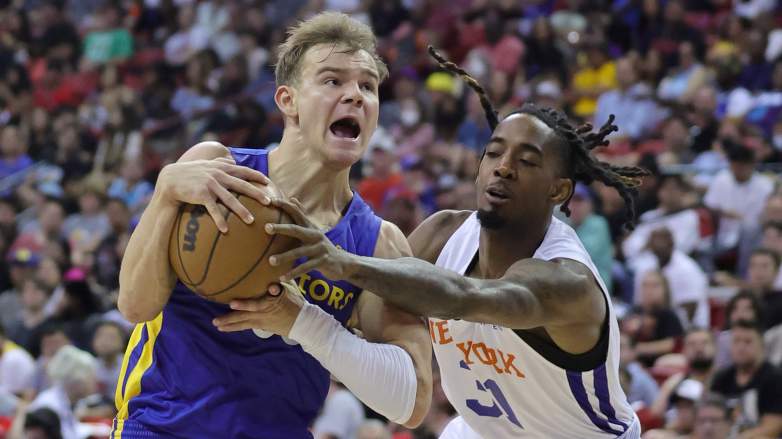 The Golden State Warriors are three players heavier as of Friday, August 5.

The team’s public relations Twitter account posted a press release noting that Mac McClung, Pat Spencer and Trevion Williams had all inked deals with the Dubs and are now official members of the organization, after each player had previously agreed to deals to join the team. The specific details of the contracts were not disclosed.

McClung is the headliner of the group after he won the G League Rookie of the Year (ROY) Award in 2021 by averaging 21.7 points, 7.6 assists, 6.6 rebounds and 1.4 steals on 36 minutes of playing time per night across 27 games as a member of the South Bay Lakers and Windy City Bulls. The 23-year-old guard appeared in one NBA game for each the Los Angeles Lakers and the Chicago Bulls last season, averaging four points and 1.5 rebounds per contest, according to Basketball Reference.

In the NBA’s 2022 Las Vegas Summer League, McClung played his ball with the Warriors’ squad, dropping 13.4 points, 4.8 assists and 3.6 rebounds across five game appearances. He also showed some flair on the fast break that could prove compatible with the likes of Steph Curry in the Warriors’ backcourt, should McClung claw his way to a role on the team.

GettyMcClung (left) of the Golden State Warriors drives against Quinton Rose (right) of the New York Knicks during the 2022 NBA Summer League at the Thomas & Mack Center on July 8, 2022 in Las Vegas, Nevada. (Photo by Ethan Miller/Getty Images)

Alongside McClung, the Dubs signed another undrafted free agent in Williams, most recently of the Purdue Boilermakers. Williams was named to the Third-Team All Big 10 roster last year and won the conference’s Sixth Man of the Year Award before playing his summer league ball for the Boston Celtics.

Undrafted Purdue center Trevion Williams has agreed to a deal with the Golden State Warriors, sources tell @TheAthletic @Stadium. Exhibit 10 contract to compete for a roster spot for Williams, who averaged 7.4 …read more