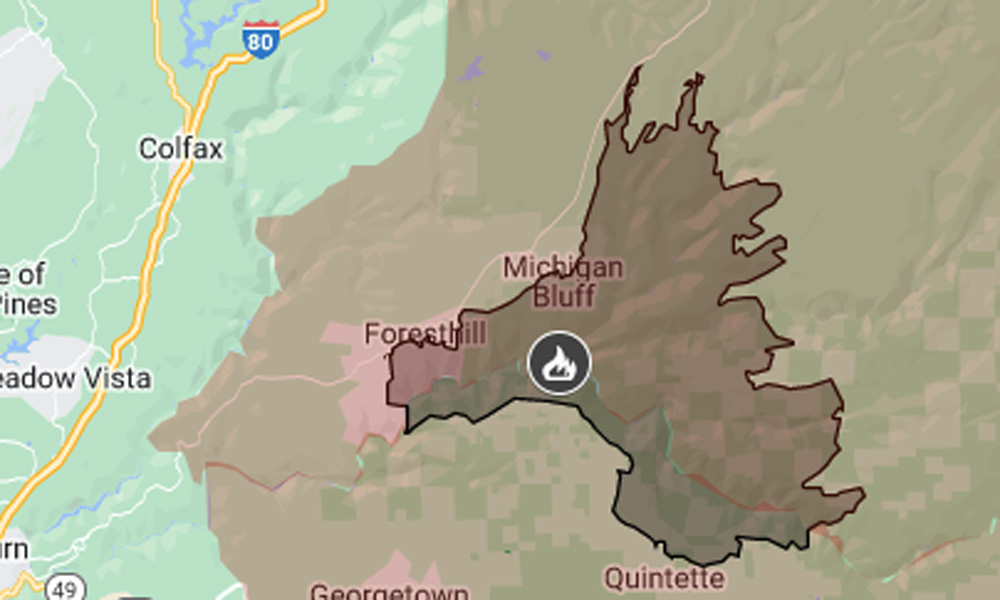 The Mosquito Fire grew by 8,000 acres overnight during a fight to protect the Sierra Nevada communities of Todd Valley and Foresthill.

It was at 58,544 acres Wednesday morning (91½ square miles), said the California Department of Forestry and Fire Protection. Containment dropped overnight from 25% to 20%.

A spot fire that ignited Tuesday on the north bank of the American River’s middle fork made an uphill run and was stopped just short of Foresthill Road in the area of the community’s high school.

Because of what CalFire operations chief Landon Haack called a “pretty significant firefight” in that area, Placer County’s evacuation zone was expanded to cover the area of Yankee Jims and Shirttail Canyon.

The evacuation area now covers about 500 square miles in both counties. No evacuation orders have been lifted, and sheriff’s officials said no residents from the cleared areas are being escorted in or allowed to go back on their own. Ninety people in Placer County have refused the evacuation order, a sheriff’s spokesman said.

More than 11,000 people have been evacuated, and about 7,800 homes are threatened, the sheriff’s offices said.

Josh Barnhart of the Placer County sheriff’s office said at Tuesday’s meeting that the expansion of the evacuation zone northwest of the fire, toward Colfax, was because of “an abundance of caution,” and that there was no danger to the communities along Interstate 80.

El Dorado County has released a map showing the status of structures; 34 buildings were listed as destroyed, most of them along Volcanoville Road. In Placer County, 64 buildings were known to have been destroyed.

The fire started on Tuesday, Sept. 6, near Oxbow Reservoir and grew quickly in its first four days. Saturday, winds died down and humidity rose, allowing firefighters to establish the first containment lines, on the edge approaching Quintette and along Volcanoville Road. Those lines were holding on Tuesday.

Since Sunday, Mosquito has been California’s second largest wildfire of the season, and it is now less than 2,000 acres short of the McKinney Fire.

The map above shows evacuation areas in pink. More details about evacuations, including areas under warning, can be found on the maps maintained by …read more

Lisa Rinna Lashes Out Over Being ‘Threatened’ by Co-Star