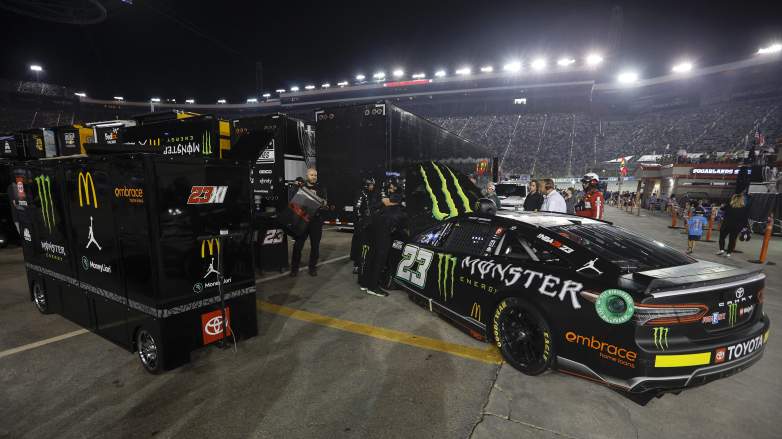 The Round of 16 came to an end at Bristol Motor Speedway. Christopher Buescher won while roughly half of the NASCAR Cup Series field dealt with significant tire or mechanical issues, which created a considerable amount of chaos.

Harrison Burton was the first to encounter setbacks. He had a tire go down three separate times early in the race. Though multiple other Ford drivers had the same problem during the course of the race. This list included Austin Cindric, Brad Keselowski, Joey Logano, and Ryan Blaney among others.

The Toyota drivers, for comparison, had significant mechanical issues. Martin Truex Jr., Bubba Wallace, and Ty Gibbs all had power steering failures while Kyle Busch’s Toyota Camry began suddenly spewing smoke and fluids after an engine failure. Of these drivers, only Wallace was able to complete the race.

“Yeah, it blew the seal out and pushed all the fluid out on the right front tire,” Truex said after exiting the race. “Just unbelievable. What’d [Kevin] Harvick say? Crappy parts.”

“It was exactly what we thought it might be,” Elliott told media members after the race. “You know, power steering problems that have been a topic of conversation, there’s tire issues as well. I think we were on the conservative side of life with that stuff just to try to make it through. We ended up having a shot [at the win].”

Some Drivers Battled & Moved on Despite Mechanical Issues

GettyTy Gibbs failed to finish the Bristol race due to mechanical issues.

Multiple Toyota drivers, as well as Chevrolet’s Alex Bowman, all lost power steering early in the 500-lap race. These issues were not all the same considering that some drivers headed to the garage while others continued racing. Bowman, in particular, finished sixth in Stage 2 and locked himself into the Round of 12 after losing power steering.

There were multiple other drivers that mentioned steering issues. This list includes Denny Hamlin, who finished ninth, and Chase Briscoe, who finished 14th and moved on to the Round of 12.

“I didn’t have [power steering] the whole race,” Briscoe told media members after the race. “It was… my arms were smoked. Yeah, that was not the most fun. It was ripping the wheel …read more

A New Era in Retail and Ecommerce Is Emerging