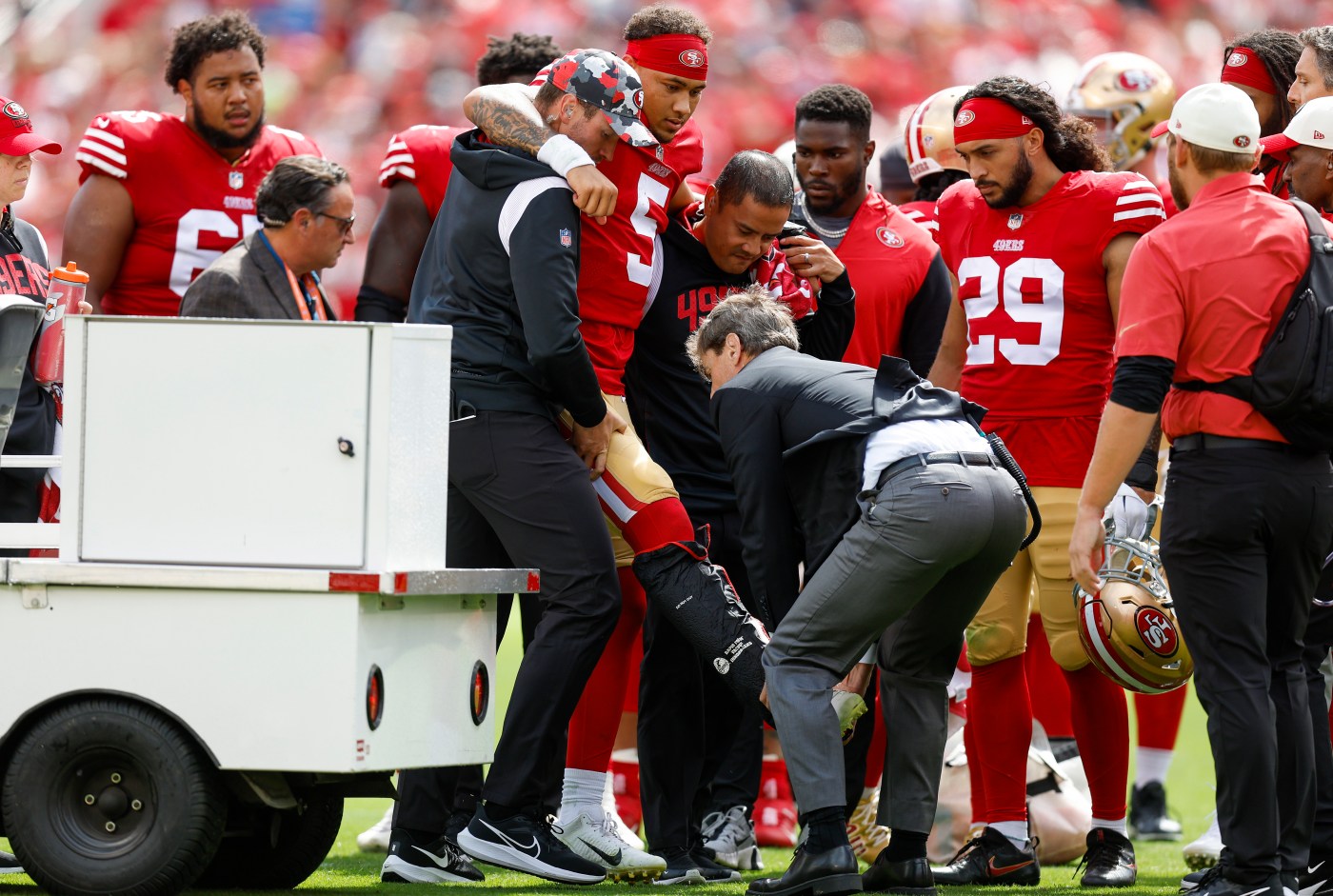 Trey Lance suffered a fractured ankle in the first quarter of the 49ers’ home opener Sunday, but Jimmy Garoppolo stepped in at quarterback and helped lead the team to a dominant 27-7 win over the Seahawks.

When Lance went down, there were a lot of concerned faces on the 49ers’ sideline — and rightfully so, as he was in obvious pain and has been ruled out for the season, coach Kyle Shanahan said postgame.

But as the 49ers extended their lead and asserted their will on Seattle, the smiles returned, reminiscent of last year’s team built on physical rushing and defense.

After giving his condolences to Lance, Garoppolo compared playing quarterback to riding a bike.

“Kyle called some plays that I knew, and some new ones for me, too,” he said, “so that was fun.”

One such play was a designed run on third-and-goal from the 2-yard line with two minutes left in the game. Garoppolo gained a yard, then finished off the drive with a more traditional quarterback sneak on fourth down. With a laugh, he said the choice to run after Lance was already injured “wasn’t my call, man.”

Kyle Juszczyk, who scored the 49ers’ second touchdown on a 1-yard rush, admired Garoppolo’s preparedness after spending all of training camp away from 49ers practices.

“Props to him for just being such a professional and being ready to go,” Juszczyk said. “I know every backup quarterback talks about ‘you gotta prepare like a starter’ but Jimmy’s been practicing for like two weeks and we’ve changed a few things but he came in there and he ran everything like a well-oiled machine.”

Defensive lineman Nick Bosa, who also suffered a season-ending injury (ACL tear) early in his second year, said he spoke to Lance briefly after the game.

“Once it happens, obviously, you feel like your life is over for a certain amount of time,” Bosa said. “But if he gets surgery, whenever that is, that kind of starts your road back. It’s not going to be easy, but he will be back and he’ll be fine. It’s just really tough right now.”

Shanahan told reporters that when he saw Lance after the game, the young quarterback was already thinking about how he can improve when he returns from injury.

“When I went out and saw him, he was just asking me about a couple of the plays before, his reads and stuff,” Shanahan said. “That’s just the type …read more

What the 49ers are saying about Trey Lance’s injury, Jimmy Garoppolo’s play vs. Seahawks

Los Gatos community briefs for the week of Sept. 23