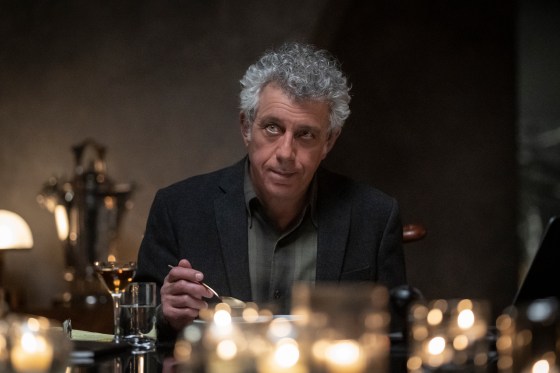 Bogosian is always the right choice to play a hard-boiled journalist, and he’s especially great at representing the internal conflict that animates a thoughtful guy whose instincts remain sharp even as his body falters. But beyond the ideal casting, the choice to make this Interview a retelling of Louis’ biography—and in some senses a sequel to the book and film—makes room for other helpful adjustments. The older Daniel is a more insightful, challenging interlocutor, and this Louis, who’s had an extra half-century to reflect on his own history, more candid. Times have changed, too, since their first meeting in 1973. More language exists to express Louis’ experiences as a queer, Black (and technically dead) man over the course of a tumultuous century for people who share aspects of his identity. In an era when depiction is too often conflated with endorsement, the framing device creates space for some sly commentary on the trope-stuffed narrative that Louis relates in Rice’s 46-year-old novel; Daniel calls one particular anecdote that casts Lestat as Louis’ white savior “the shame of queer theorists everywhere.”

Daniel’s first interview question—“So, Mr. Du Lac, how long have you been dead?”—prompts Louis to recount the events leading up to his transformation from human to vampire. A Black man of means in early 20th century New Orleans, he had few options but to invest a sizable inheritance derived from a sugar plantation in a handful of establishments in the red-light district of Storyville. (In earlier Interviews, Louis, who’s played by Pitt in the movie, starts out as a white enslaver in late 18th century New Orleans. It probably goes without saying that such a character could not pass as a hero, or even an antihero, in 2022.) As in the poker scene, he has to walk a fine line socially and within the business community to maintain his family’s fortune without appearing to pose a threat to his white counterparts. His God-fearing mother and siblings don’t approve of his work, but their comfortable lifestyle relies on his earnings. It creates tension.

Enter Lestat, a freethinking, libertine, unapologetically bloodthirsty Frenchman (Frenchpire?) for whom New Orleans, with its elaborate and sordid nightlife scene, makes an ideal home—and Louis, an attractive outsider with roots in that demimonde, an ideal companion. Given that Louis has always harbored what he calls “latencies” that only exacerbate his sense of difference, the combination of love, acceptance, and sexual satiety Lestat offers him is irresistible. Whereas the movie stopped at campy Pitt/Cruise queerbaiting, seemingly unsure whether to portray Louis and Lestat’s relationship as sexy or hilarious, the show delivers steamy, sweaty, full-throttle gay romance. The scene where Lestat turns Louis is a pulp masterpiece, set in a church and rife with blood and fire.

In the five (out of seven) episodes provided for review, Interview’s flashbacks create, more than anything else, the portrait of a rather unusual love affair that nonetheless contains echoes of other once-verboten, same-sex and interracial, romances. The introduction of child vampire Claudia (Bailey Bass, eerily convincing in the role that made Kirsten Dunst famous) slows things down a bit with overwrought metaphors about nontraditional parents. Yet the show never lapses into the preachy generalizations of

The most mesmerizing scene in the stellar first episode of Anne Rice’s Interview with the Vampire takes place around a poker table. It’s 1910, the setting is New Orleans, and Louis de Pointe du Lac (Jacob Anderson) and his new acquaintance Lestat de Lioncourt (Sam Reid) are in the middle of a game with some of the city’s most powerful men. As these white elites condescend to Louis, a prosperous young brothel owner of Creole heritage, Lestat literally pauses time, freezing everyone besides the two of them in place in order to speak telepathically to Louis and punish the racists by fixing the hand in favor of the Black man they clearly view as inferior.
[time-brightcove not-tgx=”true”]

The tableau is breathtaking—ruddy faces turned to stone, poker chips frozen in midair between the hand dropping them and the green felt tabletop. It’s also a crucial moment in the show’s fantasy-horror narrative; Lestat has yet to reveal to Louis that he’s a vampire, and this is the first overt display of his powers that Louis has witnessed. Lestat has confided in him, but there’s something more. In the language of visual metaphor, when time stops and two people communicate without speaking, that’s how you know they’re falling in love. AMC’s surprisingly smart, gloriously pulpy Interview, premiering on Oct. 2, works on all of the above levels at once.

Alan Taylor—AMCJacob Anderson, center, and Sam Reid, right, in ‘Interview with the Vampire’

The TV adaptation of the late horror icon Anne Rice’s most famous novel, from Breaking Bad and Better Call Saul executive producer Mark Johnson (who is overseeing the network’s multi-series Rice franchise) and creator Rolin Jones (Friday Night Lights, Perry Mason), arrives with a good deal of baggage. Along with the challenge of satisfying an engaged fandom that is sure to push back if the show doesn’t meet expectations, AMC has to contend with the divisive legacy of director Neil Jordan’s 1994 Interview with the Vampire film. An extremely-of-its-time hunkfest starring Brad Pitt, Antonio Banderas, Christian Slater, and Tom Cruise in a Nicole Kidman wig, the movie has become a touchstone of ’90s nostalgia. But its two-hour runtime compressed Rice’s vampire picaresque in a way that undermined the book’s languid, Southern gothic pace. Thanks largely to a ridiculous portrayal of Lestat from the miscast Cruise, it’s also campy to the point of self-mockery—and I say this …read more

Why We Need To Rethink Our Obsession With Logomania

22 Free People Sale Gems That Are Perfect For Fall